The Goat That Won't Kid 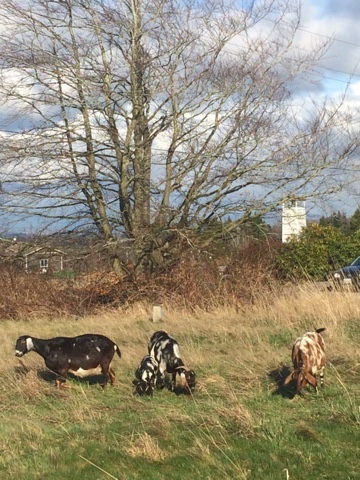 Yesterday was the first clear day we've had in ages. It's been raining so constantly that I had almost forgotten how to see colors - the world has been nothing but various shades of grey since last October. I read that this has in fact been the wettest winter in Washington State history - more than 28" since December first.

I brought the goats out to graze during our short respite yesterday (today it is raining again). See the black goat on the left? The one who looks rather like a hot air balloon or like a giant beanbag chair? That's Flopsy, and she is pregnant.

She is sooo pregnant. She is so pregnant it hurts to look at her. Her udder is tight, her ligaments are loose (see below - I can just about close my hand around her tailbone), but she just won't kid. 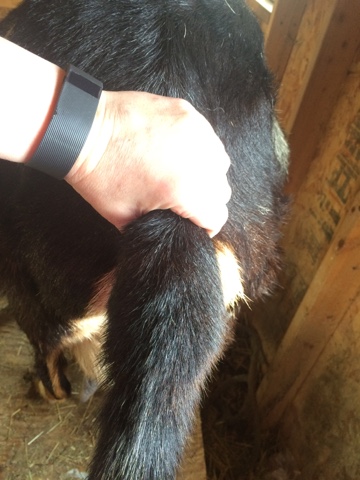 She has been like this for about a week. Every day I am certain there will be kids on the ground in the morning and every day there are not.

She just keeps getting bigger. I am a little worried - I think she is probably carrying triplets. She has thrown triplets at least twice before. Triples aren't usually a problem for a Nubian mama, but Flopsy has a problem.

Several years ago she had mastitis, a serious infection. Even with the best treatment I could provide, she lost most of the function in one side of her udder. She's lopsided. Since then, she has successfully raised twins, but not triplets.

I was hoping, after Iris lost her baby last week, that Flopsy would kid quickly, and in the event that she had triplets, I might be able to get one of them onto Iris. That is unlikely, now. Enough time has passed that autos would not accept a newborn kid.

Lots of people love bottle babies, but I am not one of them. Call me lazy, but my days of 2 am feedings are OVER. If Flopsy has triplets I'll give one of them away to a friend who enjoys that sort of thing.

Gotta go - it's just about time to go out I barn again and look for signs of incipient kids.