Canning in January! This is salsa ranchera. Recipe as follows: put 6 or 8 pint jars and lids to sterilize in boiling water. On a cast iron griddle or in a cast iron pan (dry), put three to four pounds of tomatoes (whole), two onions, quartered, six cloves of peeled garlic, and as many hot chiles of whatever type you like (split and seeded). You will have to work in batches. Turn vegetables as they blacken slightly in spots. Chiles will release fumes as they toast - remove them as soon as they get little toasty spots and open a window! Onions should be well blackened in spots. Remove all vegetables to blender (again with the batches).
Heat a tablespoon or so neutral oil in a big sauce pan, and sauté a teaspoon of cumin seed, a few cloves and a few allspice berries. Purée vegetables in batches and add to saucepan (it will spatter at first). Add salt to taste. As soon as sauce simmers, add juice of two or three limes. Then place in sterilized jars and process in boiling water until sealed approximately 10-15 minutes. Use sauce later to simmer eggs, or chicken pieces. 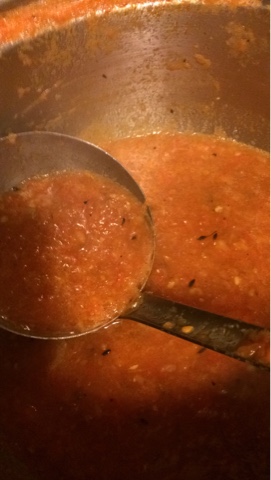