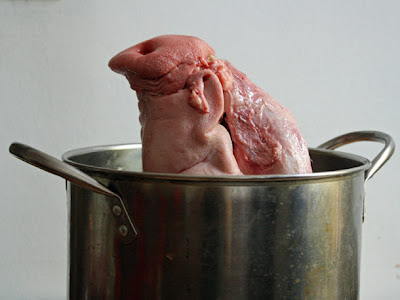 Today I went and picked up our pig from Keizer Meats. One hundred and nine pounds of pork (hanging weight) transformed into ham, bacon, chops, spareribs, smoked hocks, and sausage. I'm delighted, and the first thing I did is put some dried corn to soak so I can make a big pot of posole tomorrow (for a recipe, see: New To Farm Life: Posole (Mexican dried corn stew)).

For the most part, we try to eat only sustainably raised meat, meaning in our case, our own pork, beef from our neighbors, and our own young goat. I have not yet found an acceptable substitute for factory-chicken. We tried raising our own, with mixed results (Broiler Report (Caldo de Pollo and Liver Pate)), and we may yet try again, but for the time being, we still buy chicken at the supermarket.
Part of being responsible meat eaters is using as much of the animal as we can. Now - let's be clear. I am not trying to assert that we eat ALL POSSIBLE parts of the pig. Far from it. Sorry, but I am not interested in chitlins. Been there, ate that, won't do it again. Also, I am not going to deal with feet. Once upon a time I tried to cook pigs feet for my then-boyfriend/now-husband, and only succeeded in stinking up my kitchen so badly that I told him to pick one: me or pig's foot tacos. Luckily, he's not a complete fool. Last time we slaughtered a pig I asked for the liver, which then remained in our freezer for nine months until I threw it to the chickens.
Okay - so I'm not a fan of organ meats. At least, not pig organ meats. I do like calf's liver and I have heard that heart is delicious. We also make use of the lard. People who let the lard go to waste are just sadly ignorant. This time around, I told the men from Keizer meats to forget the liver, but to save me the head. Mostly, this was to mollify my husband, who feels that any scrap of meat not saved is a waste of his hard-earned cash. Now, I have a whole pig's head (frozen) in the trunk of my car and I need to figure our what to do with it.
So far, the only websites I have found are recipes for headcheese, which just sounds so disgusting (think: smegma) that I'm not sure I can cope with it. I don't like pate at the best of times. I may just toss the entire thing into my husband's lap (how often does a wife get to do that??) and leave it at that. Just in case you have a pig's head of your own to deal with, here are a few of the recipes I've found.
The Nasty Bits: Pig's Head | Serious Eats : Recipes
The Ingredient: Pig's Head - Gourmet Magazine - YouTube
RecipeSource: Crisp Roasted Pig’s Head

I have a hard time getting pig's heads; send it air mail!!!

My Grandfather made Brunswick Stew with the hogs head. I didn't like it because as a child it scared me to see the head floating around in a big pot. My family loves it though. I am pretty sure there is a recipe somewhere in my books but its a pretty common southern food if you wanted to look it up.

I laughed out loud at "smegma" - I'll bet there aren't many who actually know what that is!!

Laura-well, I'm a nurse! Maybe I havent worked in a decade but I remember my physiology!

When cooking a pig's head, be sure to remove the ear drums, as that can ruin a batch of whatever you're making with the head. Srsly.

I'm a huge fan of scrapple (when it's made well), and for that you can use up the head.

Hahahahahaha, you actually used the word "smegma" on your blog, that is fabulous!!

Maven, thanks for that information, I would never have known.

Hi there, i read your blog from time to time and i
own a similar one and i was just wondering
if you get a lot of spam remarks? If so how do you reduce it, any plugin or anything you can suggest?
I get so much lately it's driving me insane so any assistance is very much appreciated.

Monday for health, Tuesday for wealth, Wednesday best of all, we run AP
and Reuters content on the site.

Really? I want to buy a pigs head to roast. I live in st. Paul Mn. It is REALLY delicious! Dont know about the eardrum thing though. Can anyone trll me where I can order one or buy one in my area?

Really? I want to buy a pigs head to roast. I live in st. Paul Mn. It is REALLY delicious! Dont know about the eardrum thing though. Can anyone trll me where I can order one or buy one in my area?