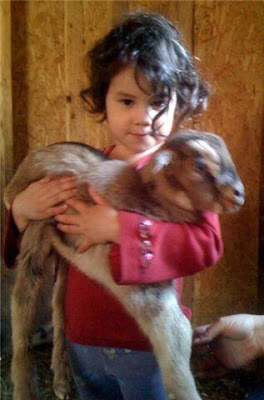 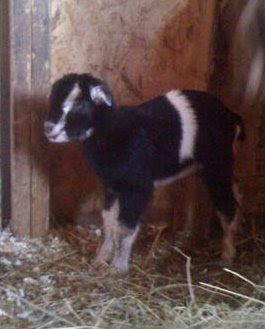 Doeling number one
Xana made good! This morning, before taking the kids to school, Homero and I decided to put Xana in the mama barn, on a hunch. Her udder was fuller and felt tight, and she had "lost her ligaments" which means that her tail root had risen up and there were pits on either side, and I could no longer feel the strong diagonal ligaments on either side. According to the books, that means 12 hours or so, but according to anecdotal evidence from goat people around here, it might still be a week. To be on the safe side, we put her in the barn with some fresh water and hay and closed the door.
When I got home at about 2 this afternoon, she was in early labor. She kept laying down and getting up again, making small gentle baa-ing noises, and within a half hour, obviously contracting and grinding her teeth. I got my supplies (clean towels and some iodine, I travel light) and a blanket, and the kids and I sat down to wait.
It was not an easy birth, at least compared to Iris' first birth last year. Xana was quite clearly in a lot of pain, and by the time the bubble started to show, she was yelling a lot and kind of rolling around. That worried me a little, and I got more worried when I only saw one hoof sticking out; there should be two, with a nose right on top of them. While I was dithering, trying to decide if I needed to go to the house and call the vet, the second hoof appeared. But still no nose, for another interminable ten minutes. The poor beast was staggering about screaming, and Bibi was getting scared. I began chasing the goat and when I got her cornered and she lay down again, I could see that the nose was properly positioned, it had just taken a while to get there. After another ten minutes with no progress (and Bibi yelling "I want to get out!" - I finally let her out and said "wait right here!") I decided I needed to provide some traction, so I used a clean towel and wrapped it around the legs and when Xana contracted, I pulled with about five to ten pounds of pressure. This worked like a charm, and the first baby was out in three contractions.
The second baby was out fifteen seconds later.
The labor must not have been very traumatic for the babies, because they sneezed out their mucus and started trying to stand up within a couple of minutes. Xana perked right up and began to eat the membranes off of them and chuckle to them and generally behave like she knew what she was doing. I let Bibi back in the barn and we all three watched the charming process of baby goats getting their feet and finding the udder. It's amazing how quickly they change from slimy little neonates to fluffy adorable babies.
Of course, there's no getting too attached to these babies. Had they been boys, they would have been destined for meat, but since they are girls, we have to decide what to do with them. I really like the little black and white one that looks like a cow. If I were permitting them names, I think we'd name her Holstein. But we can't keep all the baby goats. We can't even keep half of them. We have to sell them, or sell a different goat for every one decide to keep, anyway.
Oh my oh my. This is going to be tough.

Oh, they are adorable! What a tough series of choices coming up for you! Hopefully you can find a homesteader who wants a dairy goat so they can have a nice long life.