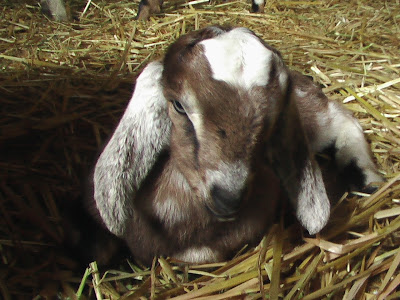 Nutmeg was the very first baby born on the farm. Our first baby goat, by a minute or so, until his sister Flopsy was born. Our only boy, and a beautiful, beautiful boy. Often, after he grew up, we wished that we hadn't had him wetherized (castrated) because he had such pretty color and gorgeous conformation.
Now we have another reason to regret it. Today, when I got home after picking the kids up from school, I let the goats out to graze. Nutmeg didn't run out with the rest of them, and when I looked at him, I knew something was very wrong. He was standing all hunched up with his head down and neck extended, and when I tired to make him move, he cried and fell over. He was shaking and stiff-legged. I called the vet and described the symptoms, and as I had feared, she said it sounded like urinary calculi.
That's kidney stones to you and me; not so serious in humans, but very often fatal in goats. Castrated males are particularly susceptible. They are not supposed to eat grain or foods high in calcium. We tried not to let Nutmeg have any grain, but he snatched some now and then, of course. I didn't realize that they were really not supposed to EVER have ANY grain, I thought that they just weren't supposed to have as much as the females.
My sister, bless her heart, came up to help me transport him to the vet. I had only the small car at home and kids, too. We did what we could: the vet gave him valium to relax the urethra and lasix to make him pee, and when that didn't work, she preformed a very small operation. It sounds worse than it is: she removed the tip of his penis, which is the narrowest part of the urethra, and she said that if the stones were in that place, he would instantly be able to pass urine and be better.
But that didn't happen. The operation didn't help, and the only option left was a major operation to go after the stones much farther back near the bladder. That just didn't make sense. Much as I like him, Nutmeg is not a champion herd sire. He's a fifty-dollar goat. And the operation doesn't have an impressive success rate, anyway. And we're talking about money that I would hesitate before spending on a beloved dog, much less a (let's face it) useless farm animal.
So we put him down. He was suffering.
I feel pretty bad. It's my fault that he ate as much grain as he did; I was lazy about holding him back until the does finished all of the grain. I let him eat some, as a treat. That's what we call killing with kindness. I won't be making that mistake again. In fact, I'm not sure we'll be keeping any wethers at all. Boys may just stay intact until they reach eating age at four months or so. But that's for another day. Right now, I'll just say a few words about Nutmeg.
Nutmeg was funny. He was cute and adorable, as all baby goats are. He made us laugh with his silly antics and he was everything a goat should be: a good jumper, a good climber, a head-butter and a leaper and a great eater-of-blackberries. I wish he had lived a long, healthy life. We'll miss you Nutmeg. Happy leaping and butting in the great green goat hills in the sky.

I'm so sorry to hear of your loss! He may have been useless in the farm sense, but any animal that can give you a laugh and fill a bit of your heart is useful in another way, yes?

absolutely. he provided us with many hours of joy and fun.

oh, that's a bummer, Aimee! He really was gorgeous!!