Lobsters of the Forest (Mushroom Madness) These ugly lumps are actually highly prized lobster mushrooms.
It’s prime time for mushroom hunting in the Pacific Northwest. The rains came in mid September, right on schedule, and since then we’ve had alternating rain and sunshine, which is just perfect for making the mushrooms pop up. By all accounts it’s been a bumper year for chanterelles.
I have long been fascinated by fungi, but I’ve not done the work of educating myself to pick them, beyond a very few varieties that are easy to identify. There’s a patch of shaggy manes out in the back pasture. I’m relatively sure I can recognize agaricus campestres (though there are toxic lookalikes). If I happened to trip over a chanterelle or a morel I would know what it was.
Nobody just trips over forest mushrooms though. You have to go out and search for them, and you have to get off the trails and go bushwhacking through the deep woods. It’s hard physical exercise and it gets you wet, dirty, and scratched up. Also exhilarated and energized.
A relatively new friend of mine is a confident forager. In the past I’ve traded her goat cheese for mushrooms, but this year I asked if I could pay her to just take me out with her foraging. Not to any of her secret spots! That would be a very rude thing to ask. Just out into the woods and help me improve my eye for good habitat and gain some confidence identifying a few more varieties. She was happy to do so.
We found several edible mushrooms - coral mushrooms and oyster mushrooms, a couple of decent boletes, and a small patch of chanterelles- but the coolest find was a large number of lobster mushrooms. 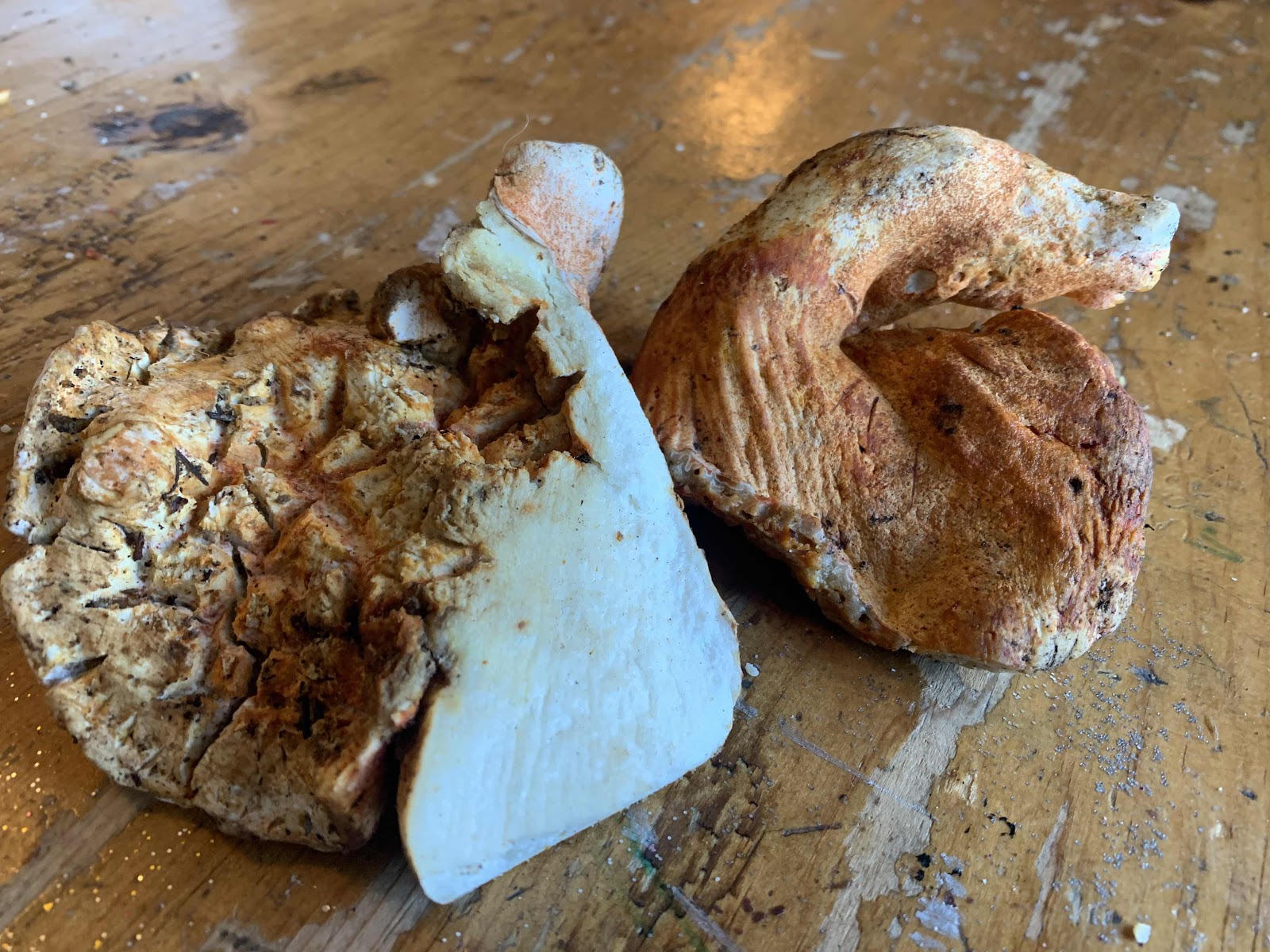 The ugly lumps after careful cleaning.
Lobster mushrooms are cool. They are actually a boring, bland mushroom that has been attacked by another fungus and improbably turned into something delicious. Lobsters start out as Russula Brevipes, which is a large white mushroom that pushes up through the forest duff in evergreen forests. They are edible but exceedingly bland. Wherever you find lots of Russulas, though, you will find a few that have been turned into lobsters. The fungus makes them bright orange and hard, and curls them into fantastic, tortuous shapes. Keep an eye out for glimpses of orange poking through the forest floor.
Cleaning them is a chore. You don’t want to wash them with water if you can help it because they will soak it up like a sponge and ruin their texture and dilute their subtle flavor. Use a stiff brush instead. Most lobsters will have at least a few wormholes in them (these ones are exceptionally free from worms) but don’t worry about that. Just trim off any bits  that seem too wormy to eat. Ditto any parts that are stubbornly grubby - though as my mom says, you gotta eat a peck of dirt before you die and eating it along with wild mushrooms seems like as good a way as any. 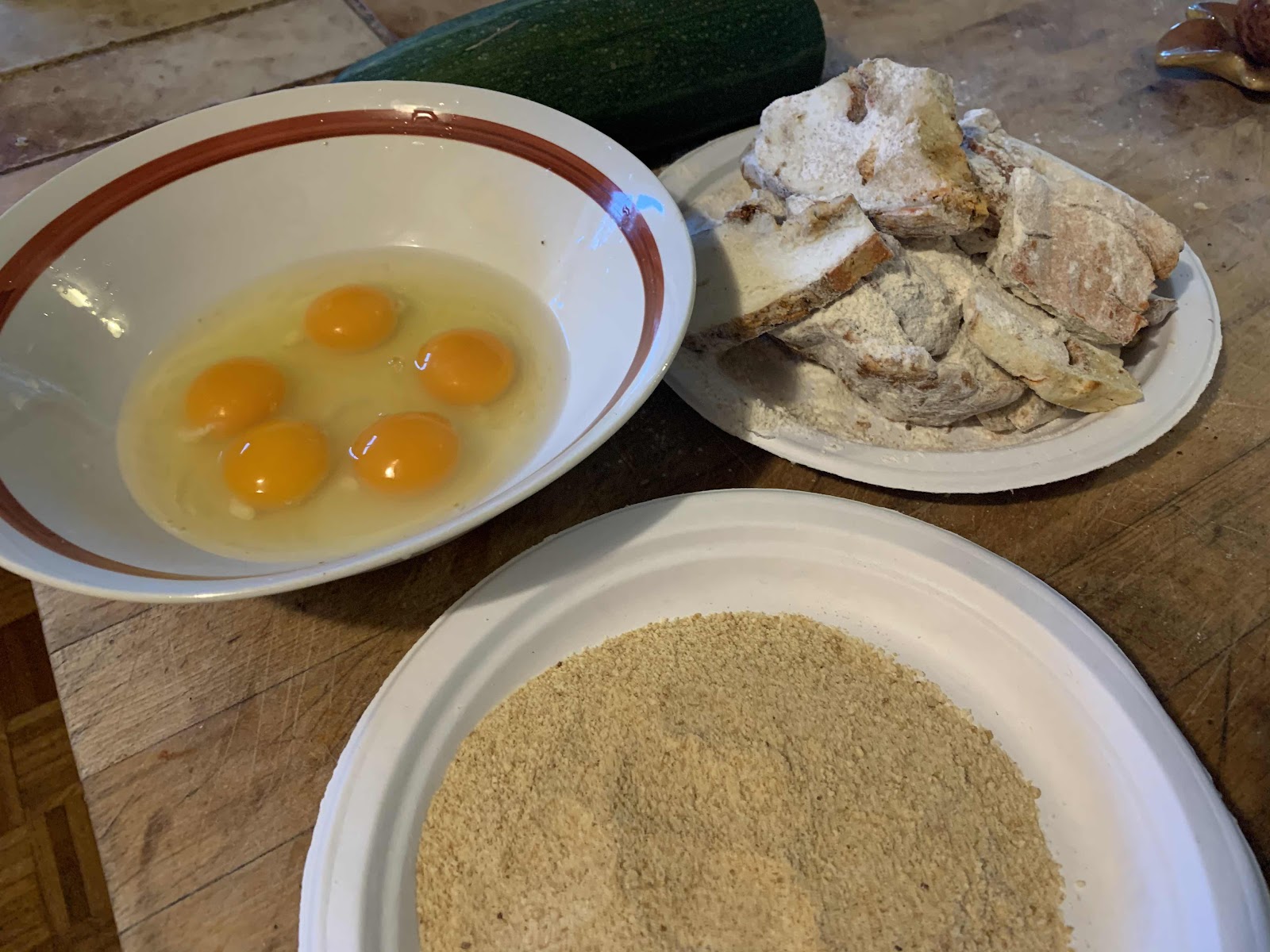 There are lots of ways to prepare lobsters, but they are one of the few wild mushrooms tough enough to stand up to being sliced and fried in egg wash and crumbs like chicken-fried-steak. I added Parmesan to my bread crumbs and pan fried the mushroom steaks y til deep golden brown on both sides. I found I liked them better the more cooked they were, so next time I might use a little lower heat and give them more time. 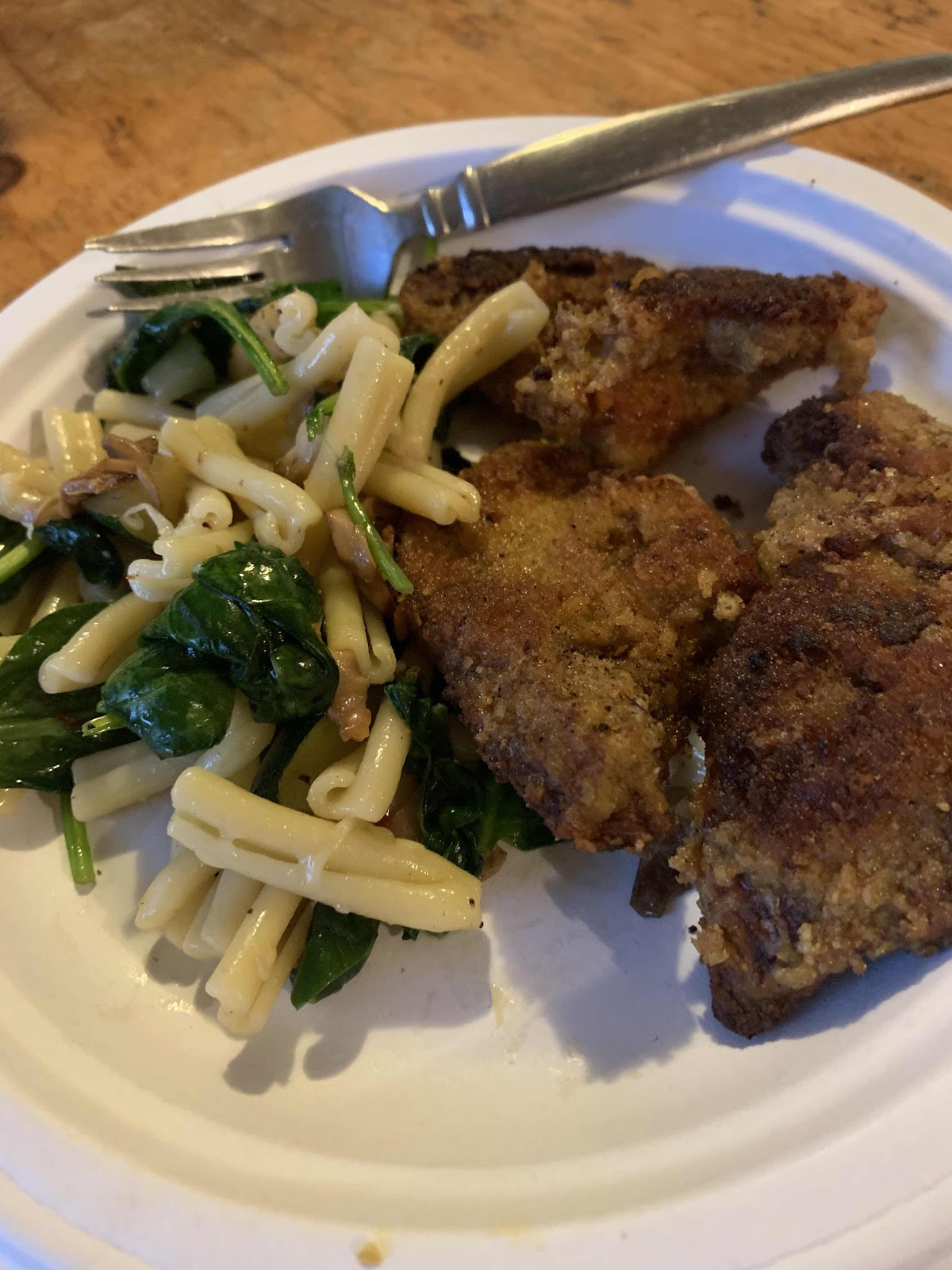 The other mushrooms we found went into a pasta side dish with spinach. My husband and kids were a little leery of eating the lobsters at first, but they both enjoyed them after trying them. Homero, in fact, ate an entire lobster mushroom
all by himself.
After three hours of hiking in the intermittent rain and then cleaning the haul and cooking dinner, Ipushed back from the table, told everyone to clean up please,  I was going to take  a long hot bath. I earned it.