Last week there was a major windstorm. They were building it up in the media for a week ahead of time - "likely the biggest windstorm since the great storm of '06," that kind of thing. The Pacific Northwest in general is not known for it's extreme weather - quite the opposite, in fact. Steady, gentle rain is pretty much our speed. We seldom have thunderstorms, and whenever there's more than three inches of snow everybody gets all in a dither. Major storms are relatively rare events.

However, we, here on our little ridge above the water, do get quite a bit of strong wind. It's quite ordinary for us to get steady strong wind for days at a time, and gusts that feel close to violent are commonplace all through the winter. We've been approached by a local wind energy group about putting a major tower on our property, one that would power fifty to eighty homes. That ought to give you some idea of the kind of wind we reliably experience (that won't happen, by the way. We were seriously considering it, but then our shortsighted county slapped a moratorium on all windmills larger than those required to power a single home).

Since we have lived here, there have been - oh, I'm going to say three major windstorms. One of them, back in '07, picked up our heavy duty trampoline - Rainbow's finest model, probably weighs 250 pounds - and threw it against our roof, knocking a fair sized dent in it. Another windstorm picked up our calf hutch and sent it sailing over the state highway and into our neighbor's field. Since then there's been only minor damage to shingles on the barn.

Last week's windstorm shredded the extra-thick corrugated plastic roof of the field shelter and chicken coop. I'm not sure if you know what this stuff is - it looks like corrugated tin that shacks are roofed with in Oaxaca and Hoovervilles in Depression-era musicals and other poverty-stricken areas, but it's made of clear plastic. It's quite thick and strong, and expensive, too, at about $20 per 4'x16' sheet.  We screwed it down onto the rafters of the field shelter and chicken coop, and it works pretty well. Until there's a major windstorm.

The wind just peeled it off in little pieces. There's still a strip of it screwed down to each rafter, but the rest of the sheets are torn into tiny particles which are strewn all over hell and gone. Not only do we have to re-roof the sheds, but we have to hike all over the property and roadside picking up seven hundred little pieces of plastic. If I can find any, I'm going to reroof with corrugated tin. What the hell, we already look like a third world country around here. 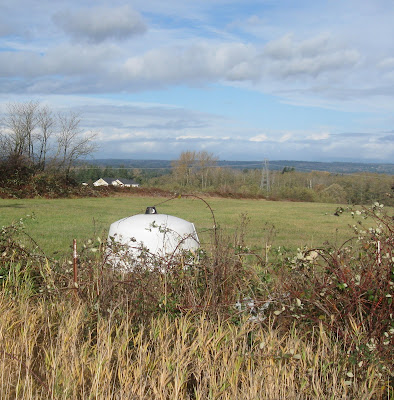 We knew the windstorm was coming. We took precautions. As usual, we parked a car next to the trampoline and chained them together (this is since the trampoline hit the roof year before last). We brought in the kiddie pool (which we have fetched from the neighbor's field once already), loose tarps, anything like that.

But it just never occurred to me to tie down the calf hutch. For those city folks among you, a calf hutch is about nine feet in diameter and maybe four feet high. Weighs perhaps 100 pounds. Looks like a UFO as it is gliding silently over three fences and across a state highway.

It's back. And tied down. There's another windstorm predicted tonight.