Smoked Salmon for Christmas (I finally Did It!) 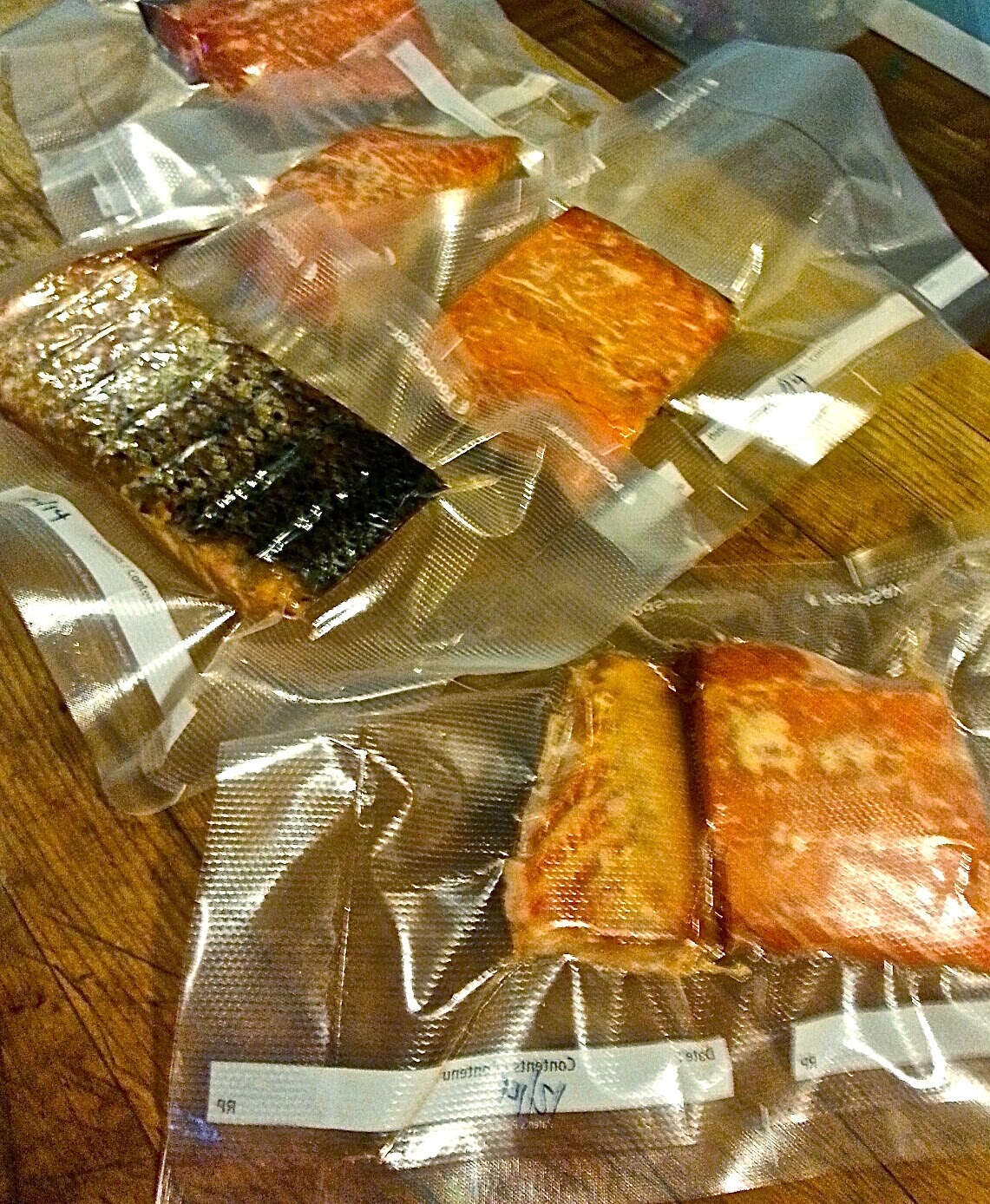 When I was a child, there were a few special packages we always waited for at Christmastime. Several of my relatives sent good gifts every year, but the packages I remember best are the ones from my stepsisters' grandma and the one from my mother's friend April. When they arrived, we would all gather around to unpack them reverently.

Grandma sent canned goods from her own garden and kitchen. What I remember best are her dilly beans, spicy and garlicky and beautiful in the tall quilted-glass jar. They always had a place on the Christmas table. April sent canned goods, too - beautiful jewel-toned jams and - most wonderful of all - tiny bottles of fruit flavored liqueurs from her raspberry and blackberry patches. Mom used to let us taste the liqueurs by pouring a little into a teaspoon. We thought they were magically delicious.

Ever since I moved up here and began learning to can and tending a garden, I have entertained fantasies of sending out packages at Christmas, packages that my friends and family would exclaim over. For seven years in a row, I have failed to do so. Not because I don't have canned goods - I usually do, though it is true that there are never as many jars in the cabinet come December as you imagine there will be, when you are bent over a hot stove in August. I am already out of salsa, if you can believe that. No, I have not sent out my packages out of sheer laziness and disorganization. Good intentions, it turns out, won't get you to the post office.

This year I was determined to overcome my natural sloth and fully intended to send out canned goods. I set aside little jars of cajeta (New To Farm Life: Cajeta is Love), lemon curd, and dilly beans. The beans were pilfered by my daughter Hope, who has a passion for all things pickled, and there are none left. The cajeta didn't turn out well; for some reason it turned out not like caramel sauce but sort of like milk-fudge. It's not bad in coffee, but it's not of a quality that I would give as a gift. That left lemon curd, but only three half-pint jars, and I have six people on my package list.

Luckily, we had an abundance of salmon this year. Not only did I buy a few fish, as I always do, but just recently a customer of Homero's who works at some sort of fishery gave him a tip consisting of two gigantic sides of Alaskan King. We ate some fresh, and it was the best salmon I've had in ages - rich and buttery and deliciously fat. I told Homero "whatever you do, keep that guy happy!"

I started smoking the salmon just as a way to preserve it. A couple years ago I canned some king salmon, with the help of friends who loaned me their pressure canner, and it was good, but not as good as smoked salmon. It occurred to me that smoked salmon is not only a universally appreciated gift, but also considerably less bulky and expensive to send than food in glass jars. Not to mention that, as much as we all enjoy smoked salmon, we are unlikely to eat ten pounds of it in a year.

My "little chief" smoker is missing a rack, so it took me three sessions to smoke all the fish. Two sides, cut into generous filets, made twelve good sized packages. Last week I got myself together, hunted down addresses (in some cases calling and asking) and sent out five bubble-wrap lined manila envelopes with salmon inside. I'm so proud of myself. I finally did it. I know my friends and family were happy because they all called to tell me so. No promises, but I think I may make smoked salmon my signature gift. It's hard to let go of the image of multiple, tiny, jewel-toned jars, but salmon is easier.

Since I don't have a vacuum sealer (I should probably get one if I plan to make this a yearly tradition), I borrowed one from a neighbor and gave her a package of salmon in trade. That leaves six packages in my fridge. I'm sure a few of those will be taken as hostess gifts to parties and gatherings this year, and I know my sister is getting one under her tree (sorry, Jen, for ruining the surprise), but that still leaves us with plenty of delicious smoked salmon to keep us going until next summer.

Cut a filet of king or sockeye salmon into approximately 1 lb pieces. Salmon will lose a lot of weight in the smoker and smaller pieces will just seem measly. In a large non-reactive pot or bowl, combine a gallon of water, 1/3 c. sea salt, 1 c. white sugar, 1 tablespoon garlic powder, 1/3 c. soy sauce, several slices fresh ginger root, and 1 tablespoon (or to taste) sriracha. Make sure there is enough brine to completely cover salmon pieces. Refrigerate overnight. In the morning, prepare smoker according to directions (I use soaked alder wood chips). Smoke salmon to desired doneness but at least 6 hours. You will need to dump ashes and add chips at least four times. I smoked mine for almost 9 hours because I like a fairly hard smoke.

You can borrow the vacuum sealer anytime! Best lunch I have had in a long time!!!

I have no memory of Grandma ever sending us anything from the garden around christmas. Weird, huh?

Maybe because you hate pickles?