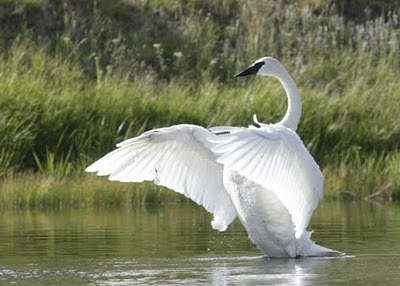 The day before yesterday, I saw the first trumpeter swans of the season. Twice a year - in the early fall and then again in the late winter - trumpeter swans pass by as they migrate. I assume, though I really am not sure, that this time of year they are migrating North to their spring breeding grounds.
We are in the middle of the Pacific flyway here and there are many other waterfowl who pass by twice annually - Canada geese, tundra swans, snow geese, and others. The trumpeters are the most spectacular, however. They are really huge, for one thing. When I saw them the other day, they were feeding among the rubble of a corn field along with some Canada geese. Most of you will be familiar with Canada geese - the large, brown and white geese ubiquitous in city parks all over the united states. Canada geese can be scary. They are large enough, and aggressive enough, to intimidate a six year old, for example. Well, trumpeter swans are nearly twice as big.
The field that I pass by is on a quiet country road, and so I stopped to observe the swans for a while. There were about fifty of them, perhaps as many as seventy. Most of them were adults, but there was a smattering of grayish juveniles as well. Many of them were doing a strange kind of dance, dipping their necks and stretching them out, over and over again. I don't know if this was a mating ritual or perhaps just part of their normal feeding behavior.
About thirty miles south of me lies the Skagit Valley, a beautiful, productive, wide flat river valley created by the Skagit river. The Skagit is threatened by runaway development, but still supports some of the greatest abundance and variety of bird life in the entire country. It is, for example, possibly the best area in the lower 48 for observing bald eagles. The estuary supports tens thousands of waterfowl of many different species. In the right season, a person simply cruising along the freeway can observe thousands of trumpeter swans on their annual migrations.
Below, please find a few links to societies which are actively working to protect the Skagit river and its wildlife. Few rivers in the country have as much potential to support wild birds as the Skagit does. Thanks for your support!
Skagit River System Cooperative
The Skagit River in Washington | The Nature Conservancy
The Trumpeter Swan Society

Beautiful birds Aimee, we don't have them here in Oz (I think)but we do have many colourful parrots.
This year we did not net our fruit trees and sadly, the parrots have devoured most of our fruit. It wouldn't be so bad if they only tasted one or two, but no, they blighters have to bite holes in each and every piece. I try to justify that by thinking all creatures have to eat, but, do they leave any for us? NO!!!

I can't help but think about how ultra cool God is to have created such awesome creatures to share this world with us. Amazing. Great post.

My developer is trying to convince me to move to .
net from PHP. I have always disliked the idea because of the
costs. But he's tryiong none the less. I've been using Movable-type on various websites for about a year and am nervous about switching to another platform.
I have heard excellent things about blogengine.net. Is
there a way I can transfer all my wordpress content into it?
Any help would be really appreciated!
Visit my web site - Canada Goose Norge

It's nearly impossible to find experienced people on this subject, however, you seem like you know what you'rе talking abοut!
Thanκs

I сonstantly ѕpеnt my half аn hour tо геad this webpage's posts everyday along with a mug of coffee.

ӏ've been exploring for a little bit for any high quality articles or weblog posts on this kind of area . Exploring in Yahoo I eventually stumbled upon this web site. Studying this info So i am satisfied to express that I have a very good uncanny feeling I discovered exactly what I needed. I most indisputably will make sure to don?t put out of your mind this website and give it a glance regularly.

Feel frее to ѕurf to my ωebsіtе :: resistor Color Code

I rеally likе yοur blog.. very niсe coloгs & themе.
Did you create thіs ωеbsіte yourѕеlf or did you hire someοne to
ԁo it foг you? Plz reply as Ι'm looking to design my own blog and would like to know where u got this from. thanks a lot

Heу! I know this is kinda off topic but I was wondering which blog platform are
yοu using for this wеbsite? I'm getting tired of Wordpress because I'ѵe had issuеs
with hackers and I'm looking at options for another platform. I would be fantastic if you could point me in the direction of a good platform.