The Big Reveal (What We Want) 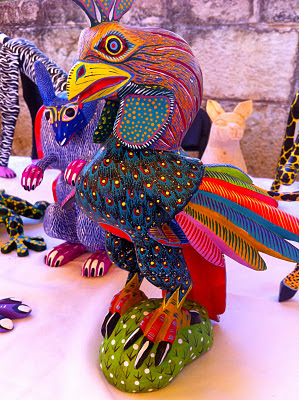 I've been sitting on a major news item. My husband and I made a decision a few months ago, which we only revealed to our families recently. Making this decision and dealing with the ramifications has been sucking up an awful lot of my brainspace, which helps explain why I haven't been writing very much.

We are moving to Mexico. Not permanently: for about a year. Ever since we had children, we knew we would do this at some point. We want our children to know their family and their heritage more fully than they possibly could if annual two-week vacations are all we can give them. We want them to be truly bilingual, not just fluent in a a second language as I am and as their father is. We also want them to be bicultural.
That's a weird word, bicultural. Just as neither Homero nor I is truly bilingual, neither are we truly bicultural. Being bilingual means more than simply being able to converse fluently. It means understanding slang, and jokes. It means being able to speak to a toddler as well as a grandmother. It means hearing accents, and being able to infer something from them. It means being able to read poetry. Few people can do those things in a language that they learned as an adult.
Similarly, being bicultural means more than just being able to get along in another country without committing a bunch of ignorant mistakes all the time. Understanding gestures - just gestures! - is complicated. After ten years married to a Mexican and many trips to Mexico I still misinterpreted a simple "reverencia" on our last trip. Manners. Manners are tricky even in one's own culture, of course, and are a subject wide ranging and variable enough to spawn several books on the topic in any given year. Learning the right things to say and do in various contexts in another culture is a process that takes decades.
And - here's where it gets complicated - learning the assumptions and the realities on which those manners are based.... ah! Now we're getting somewhere. As with language - a person might be fluent enough to read the Spanish translation of the Mayan book the Popol Vuh, but still totally unable to comprehend it, because one has no grasp of the symbols, the references, and the feelings that suffuse it.
I remember visiting the Mexican Museum of Anthropology in Mexico City for the first time. Surrounded by art and artifacts that were wholly unfamiliar to me, I felt dumbfounded. I realized I could not appreciate this art - not because it wasn't beautiful - but because I was totally illiterate in the language of symbols it used. I realized that in just about every other museum I had ever visited, the art was based on a symbology - and even deeper, a cosmology - that is part of my heritage as a European. Even when looking at Indian art, or Middle Eastern Art, I can find the marks of Greek, Jewish, and Christian thought. Our shared history makes a path that is easily to follow. I recognize the pantheon of Gods, even if I don't know their names in Sanskrit or Aramaic. I know what the moon means, more or less, all across Europe and Asia Minor.
In Mexico, I knew nothing. Where art and cosmology is concerned, I was as an infant. The symbols slid right off my brain. Americans think of Mexico as a neighbor, and have no idea whatsoever how very different it really is. Even five hundred years of European rule have only left a familiar suit of clothes on the great brown body of Indigenous Mexico.
Octavio Paz calls Mexico a "non-Cartesian culture" and that is true, and also a very hard thing for a westerner to accept. We tend to see all non-Cartesian thinking as simply uneducated, rather than as part of a different tradition of knowledge. Mexico is a communal culture rather than an individualistic one, and that is a very hard thing for an American to accept. Americans who have spent time in other communal cultures such as Japan or the Arab countries will know what I mean when I say we see them as smothering and constricting, and they see us as cold and uncaring.
Necessarily, I am taking a bit of a leap of faith here. I am not Mexican, I am not bicultural, and it is too late for me to become so. I have found a great deal to admire in Mexican culture as I know it, and I love the Mexican land and I adore my Mexican relatives. I want my children to have real, deep relationships with their family, and I want them to be real Mexicans as well as real Americans. I want them to develop the typical thick, tangled web of kinship relationships. I want them to grow up with many comadres and compadres. I want them to grow up knowing deep in their bones that their family will do anything for them, anything... and to feel the equally deep obligations to help out to the best of their ability. I want them to laugh at dirty jokes and speak street slang in Spanish. I want them to be have that beautiful sparkle, that lovely Mexican ability to laugh at fate even as you accept its yoke, to bend in the wind and pop up dancing.
On one of my trips to Mexico, years ago, I had a dream. I dreamed that I was on a boat in a river, and that the a gaudy, gorgeous, colorful Mexican countryside was rolling by on the shore. There were people on land calling to me, inviting me to join them, but I couldn't get off the boat. I could only slide by and enjoy the view.
I want my children to be on the shore.

What an incredible opportunity for your family! Your children are at great ages to understand and learn a new culture. And just being able to spend a year with extended family is priceless. They'll thank you forever.

Wow, I look forward to your ethnography!

I grew up Bicultural...so many wonderful experiences because my parents purposefully brought cultural awareness into our home, when no one else was even understandng the term.

Life is flexible. Mexico is a beautiful place with areas to watch out for, just as there are here in the states. Since you have supportive family there, it will probably be a great experience.

Keep moving forward. Blessings on all of your decisions.

Wow, good luck. It can't be easy moving to another country, even if it's for a year.

A Mexican-American friend had troubles transferring her grades across the border -- so be careful with the schooling. Also, Mexican schools have a far more rigorous discipline system and care about handwriting a ton. So be on the lookout for problems from that, as that's I think more of a culture shock than anything else.

Dea Chan,
we haven't decided for certain whether the children will attend school or be homeschooled. My Mexican relatives are pushing for school - as are my friends and relations up here who are teachers - but I am not yet convinced. We'll see.

You are such a wonderful writer, Aimee. Best wishes on the new direction...

I think it's a wonderful opportunity for your family. The girls will be richer, deeper people because of the experience.

I grew up 5 miles from the border. I get some of the slang, some of the jokes, but being a gringa, from a long line of gringos, there are parts that I will never be privy to.

What wonderful parents you both are, your girls will have an enriched life and great understanding of their Mexican culture.
Are you selling the farm?...surely not?
Just through reading the posts about your holidays to Mexico I have learned what a colourful and beautiful place it is. If I wasn't so old...(maybe)...I'd come for a visit.Ha-ha!!

Wow. That is incredibly... Wow. This gives me kind of a different perspective on Homero and why he does the things he does. I think of family in a completely different way from what you just described... Yes, we're family and we love each other very much, but that's kind of where it ends. In my mind the only person you share everything with and expect everything from is your significant other after years and years of building up trust... Your family can catch you when you fall, but it's shameful and wrong to rely on them too much. I feel guilty for relying on you as much as I do. I guess in the context of Mexican culture everything you described makes sense, whereas in the context of American culture that kind of thing is just naive. You grow up, you get a job, and you see your family during the holidays. More often if you actually like them. ...I want to find a balance between the two ways of thinking, although I'll probably always be heavily weighted in favor of the American style.

This is awesome. It's such an amazing thing to be able to give your kids - living in another culture by itself is such a valuable experience in shaping the way we see the world, but having Homero and his family thrown in the mix just makes it better.