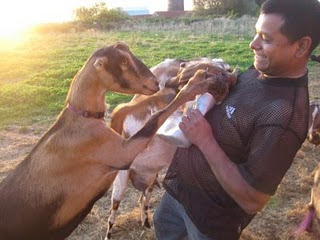 This morning the results of my herd testing for CAE and CL came in. All my goats are negative for CL (so the hole in the goat was not a CL abscess), and all goats but one are negative for CAE. The positive result was, of course, Django. Django hasn't been a really healthy goat in a few years, and I attributed that to the aftereffects of her severe overeating illness - and I'm sure that played a part. But the other part is that she has a chronic debilitating disease.

In some ways, this actually makes me feel a little bit better. It may seem strange but now I know that her consistently below-par condition was not the result of below-par care on my part. It explains her thinness despite excellent forage, her slowness, her poor coat, all of it. It may even, indirectly, explain the abscess: goats with CAE spend a great deal of time lying down, which would naturally tend to cause a pressure ulcer in that location over time. Poor Django! She really has been a valiant goat - the energy it must have taken her to throw triplets year after year and produce for them, all while battling a nasty virus like CAE!

Well, she will soon be out of her pain. Homero is out digging a hole right now, and when it is deep enough, we will shoot her and put her in it. It's sad, actually sadder and more difficult than I thought it would be, but it's absolutely necessary. Transmission of CAE is almost exclusively vertical from dam to kid in the colostrum. Lateral transmission of CAE from adult to adult is very rare (which explains why my other does are negative after living with Django in close quarters for years) but it can happen. But even if I were assured it were impossible, I would still put her down. She is uncomfortable now, but soon she would be in pain every day. Also, of course, all of her kids would be CAE positive, and nobody would want to buy any kid from my farm - a position I totally agree with. I intend to maintain a clean herd, by any means necessary.

Damn it smarts, though. Even Homero, normally quite unemotional when it comes to life and death questions about animals, is feeling it. He calls Django "Cirquera," or Circus Goat, and liked to hold up food and have her stand up and follow him on two legs. 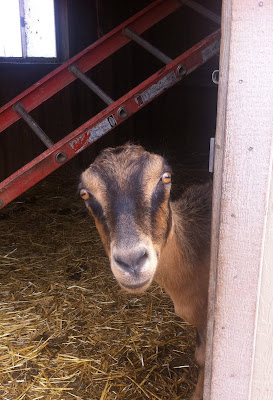 Well. I can't think of much more to say. Django was a great goat and she gave us many dozens of gallons of milk over the years. I enjoyed watching her antics, and I loved watching her kids gallivanting around. Luckily, most of those kids were meat animals. I can only think of one doeling that we sold of hers that might still be alive. If I can find that person's number (doubtful) I will call her and warn her not to breed that baby.

It's all part of farming. That's what Homero says.

So sorry Aimee. We put down a goat that was thin and CAE positive, but she had just arrived on our farm so I was not attached. Farming is tough sometimes.

I am very sorry to hear this. If she is thin and suffering from it then I can totally understand. If she was still healthy (some goats can live with CAE for years and years and never even show symptoms)then if it was me I would give her away as a pet to someone looking for just a pet only, with full disclosure about her CAE of course. It is never easy to lose one and it is hard to see them suffer. Farming can be hard at times like this for sure!

I'm sorry about the bad news with Django. Of course, it's best not to let her suffer, but I know it must be very difficult to go through this.
Best wishes.

Hi Aimee, so sad when one has to put an animal down but better than to allow it to suffer.
We have just returned from a driving holiday to Darwin (about 5,000km return) to find one of our calves bleating in the paddock with its mother dead in one of the dams. Can't work that one out. So it looks like a few months of bottle feeding.
Yes it certainly can be tough sometimes.

Sad news, but sounds like you're making the wisest decision - big hugs to you both!

So sorry for all of you, but you are doing the best thing for her also, hang in there!

Olive -
how awful! Poor baby. Good luck with bottle feeding. I hope you had a nice time on your holiday - Have you ever been there before? Sounds like quite a roadtrip!

Everyone - thanks for your condolences. Django at least enjoyed a glorious last day - beautiful sun, and I let them all out to browse for hours today.

I'm sorry that you have to do this, but, as you said, it's a part of farm life (a necessary, evil part).

Interesting that you found the cause of her "punkiness" - sorry that it was her death sentence.

Tell Homero that she's going to the goat circus in heaven - she'll be happier there!