Gimpy Goat and No More Milk 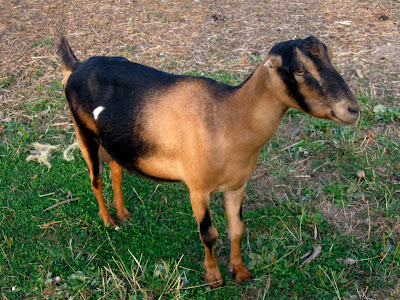 This is Django. She is one of the original three goats we bought when we moved here, and now she is the only La Mancha I have (La Manchas are the earless goats. Nobody cut off her ears: it's just her breed.). Django has always been a good goat - good mother, good milker, about as easy-going as a goat gets. She did get terribly ill a couple of years ago after getting into the grain, but she recovered and has been pretty healthy ever since. She had triplets this past year.

Yesterday when I went out to do the chores, I saw something awful. Django appears to have a dislocated shoulder. One of her shoulder blades is depressed downwards and if I lay my palm on the place where it ought to be I can feel the bone socket. Her elbow is rather radically displaced - down and to the side. Nonetheless, she is getting around okay. I called the vet, of course, and as I was trying to explain exactly where the dislocation was, Django kept running away from me. As James Herriot said in his wonderful book All Creatures Great and Small, if you can't catch your patient you've probably got little to worry about. She was browsing normally and later on chewing her cud. She didn't cry when I manipulated the joint.
The vet said that he's seen this before, and never had any luck trying to manually replace the bone. He said an operation would be the only option. Well, I said, it's not an option for us... do you think she'll recover on her own? Is this a very painful condition? He said that it was unlikely the joint would "pop back in" on it's own, but that over the next few months she would develop a false joint and be more or less normal. She would look funny and probably never quite keep up with the herd, but once the joint stabilized she would get around fine. It's hard to tell how much pain a goat is in, they are very stoic animals, but it's a good sign that she's chewing her cud. He said it's a good thing it's the foreleg; hind leg displacements are more problematic and could interfere with kidding.
So we aren't going to do anything. This morning she jumped on and off the milking stand just like usual. She is interacting with the other goats and seems pretty normal, except for that weird elbow thing. I'll just keep an eye on her and watch for worsening mobility or signs of pain. If she does get worse, we'll have to make a decision then.
Also, all the goats are more or less dry. I got about a cup of milk from each one, and that's just not worth it. Most likely they are all pregnant and so I'll just stop milking until next spring.
Cheese season is over at last!

oh, poor girl!
Lately seems like everyone has been cursed with sick or hurt animals. I guess a long and productive summer has come to an end at last.

Since an operation is not an option, I assume that the decision you would make is between letting her suffer and putting her down?

How old is she, with regard to the lifespan of a goat? Would that represent a significant capital loss? Does that even come into it? Django is a pet goat, right, not just a ma'am? How does that influence the calculus?

Bro, right. I won't let her suffer, but she doesn't seem to be suffering now. I feel pretty confident that I can accurately judge if she's enjoying life or not. Django is not a pet, but she is a mama goat. I personally wouldn't ever eat a mama doe and feel pretty strongly about them. I would and have given them repeated vet treatment ( when flopsy had mastitis for example). But operations and other high cost treatments are not practical.
Ivory is a pet. Ivory would get the operation.

There was a deer doe at our old house who had a dislocated shoulder much like you describe. We felt sorry for her and thought about "putting her out of her misery." We didn't, though, and she not only lived at least 4 more years (we moved), she had twins each year. Never had any problems keeping up with the herd, and eventually that leg atrophied and stayed completely out of her way. I'd go with Harriot's assessment - if you can't catch her, she's probably not suffering too much!

close to home, thanks for sharing that story, it makes me feel better!