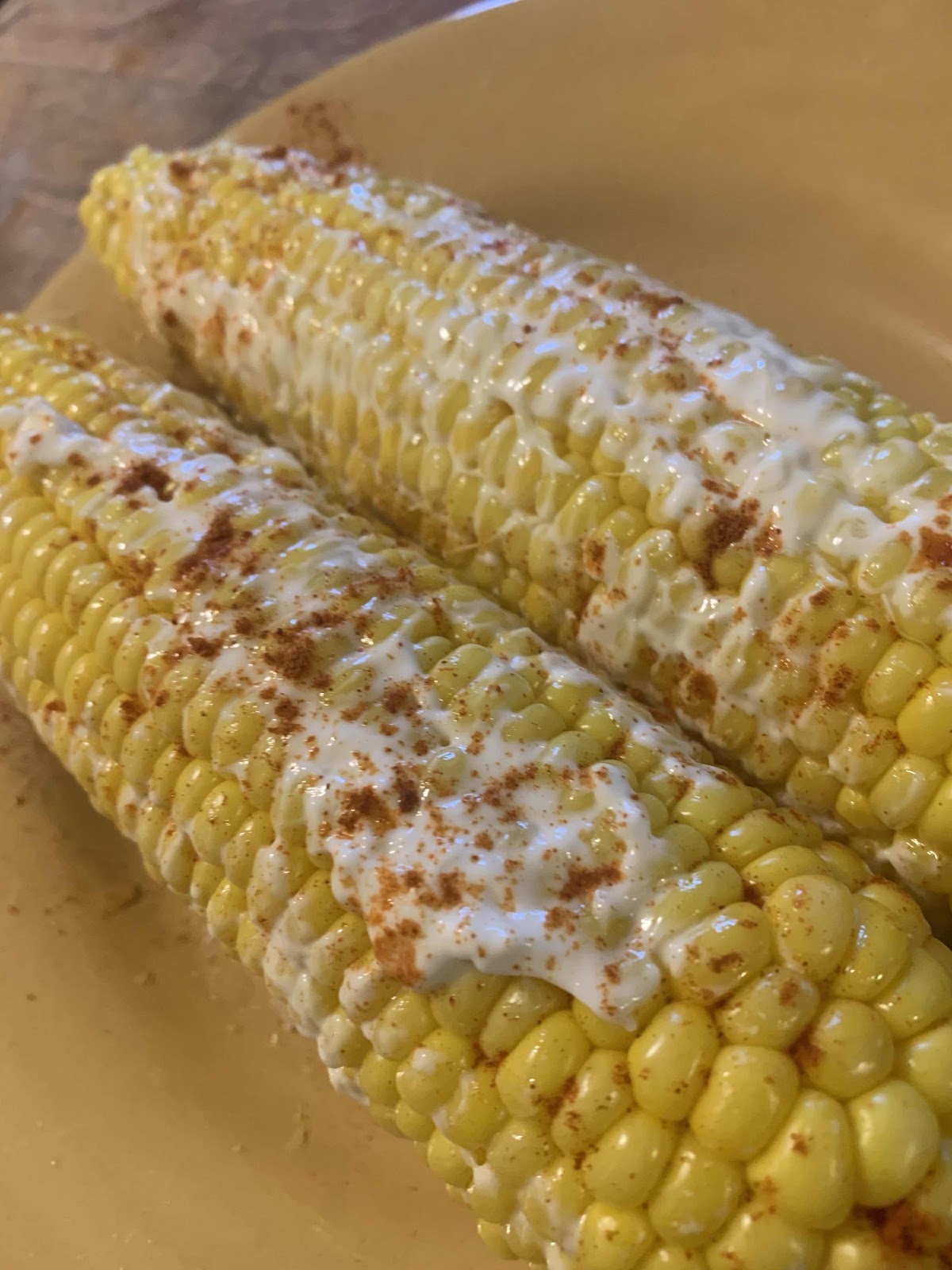 If you’ve never had sweet corn Mexican style, you really have to try it. When I was a child, we rolled our fresh boiled ears of sweet corn on top of a cold stick of butter, unwrapped and set on the table for that purpose. The hot corn melted a deep divot in the butter, making each subsequent ear easier to baptize. Then we sprinkled the ears with salt and went to town.
There’s nothing wrong with that “recipe.”  I believe it was Garrison Kieller, in his wonderful memoir Lake Wobegon Days, who first asked the question “yeah, sex is great, but have you ever had fresh sweet corn straight from the field?” I will not go on record as to my preference, but I will affirm that fresh sweet corn bathed in butter and sprinkled with salt is one of life’s great pleasures.
The kind of super-sweet hybrid corn we enjoy in the states  was more or less unknown in Mexico until very recently. Traditionally, all corn grown in Mexico for human consumption is what we know as “field corn” and generally used as animal feed. A little more scientifically, it’s known as “dent corn” for the little dents that develop in the center of each kernel as it dries. This is the corn that Mexican families grow, dry on the cob, twist the kernels off and store in buckets, and eventually turn into nixtamal and grind into masa to make the staple Mexican food, tortillas, all year round. There are literally hundreds of varieties - white, yellow, green, blue, red, black, and speckled.
While most of the harvest is let to mature and will be used as described above, some of it is picked “tierno,” or “tender,” and eaten fresh. It is nowhere near as sweet as our hybrid corn, but it has a toothsome chew, and a satisfying heft that fills you up as sweet corn does not. It’s a complex carbohydrate, for sure.
In Mexican Spanish, a fresh boiled ear of corn is called an Elote. It’s one of the most common street foods, served slathered with mayonnaise, squirted with fresh lime juice, sprinkled with chile powder, and rolled in grated cotija cheese. The same assemblage of flavors can be served in a cup, made up of the kernels of corn cut from the cob and then dressed with the same toppings. In this form it’s called Esquites, and it’s my absolute favorite Mexican street snack.
One of my finest memories is sitting on a wrought iron bench in Oaxaca’s zocalo on a fine summer evening, eating esquites and watching dozens of well-dressed couples of a certain age dancing to the music of a marimba band. One of my greatest ambitions is to be one half of such a couple, on a fine summer evening a score of summers hence. And lord, I hope there will be esquites to revive me after I tire of dancing.