A Low Ebb (Spring of Fools)

I am not digging having a farm at the moment.
It’s wet cold and windy and disgusting and muddy and the forecast suggests it will continue like this through the foreseeable future and likely until well after I have run screaming into the distance.
The barn is still full of winter’s deep litter because nobody here is strong enough to muck it out, except my husband who refuses to let me pay someone to do it, but who also refuses to do it himself. “As soon as I finish this engine rebuild; as soon as I finish this transmission; as soon as everybody picks up their cars and I can take a couple days off...” As soon as Hell freezes over, he means, because Homero hasn’t taken a day off in months. Meanwhile, all I can do is keep throwing down fresh straw and making the whole problem deeper and more difficult to deal with.
The Tom turkey is a vile monster who has injured two of the hens so badly that they needed to be isolated in the mama barn to recover. One of them appears to have a broken leg or something - she can’t stand up at all and so I’m afraid she has to be put out of her misery and into our freezer. The Tom, meanwhile, is angry about his missing hens and attempts to attack us whenever we step into the barnyard. He’s at least twenty-five pounds, better than knee high, and I’m not ashamed to admit I’m scared of him when he is hurtling towards me at top turkey speed, intent on battle.
He’s going into the freezer too, as soon as Homero has time to do it, because I’m not going to try it myself.
All the baby goats are sold. But it looks like we might lose another one. A couple who bought two bucklings took them to the vet to be disbudded Friday. I had told them that I don’t disbud, and tried to lay out the pros and cons fairly, but leaning towards leaving them alone. They decided to go ahead. And now one of the babies is in a bad way. His little brains are fried. He just stands in a corner and cries, can’t nurse or anything.
I went to the vet for antibiotics, anti-inflammatory medicine, and steroids. This morning he’s unchanged, and I don’t think he’s managed to nurse. I can’t get a bottle into him either. He probably needs some tube feeding, but I’ve never done that before and am scared to try. Only good news on that front is that the new owners are very understanding. They trust that I’m doing my best and say they won’t blame me if I accidentally kill him while trying to tube feed him.
Christmas, his mother, is once again being a shitty mom. She’s never really been a good mom - she kids easily and throws beautiful babies but she won’t let them nurse. Needs to be held. I’m sick of wrestling with her. Thinking I might try to sell her as an in-milk doe to somebody who just wants milk but not babies.
Overall I’m feeling extremely dispirited and unhappy. I’m thinking it would be extremely nice to live in a little condo in the city, just a cute little one bedroom in a smaller building near some good restaurants and nightlife.
A building that doesn’t allow pets.

Posted by Aimee at 3:05 PM 6 comments Links to this post 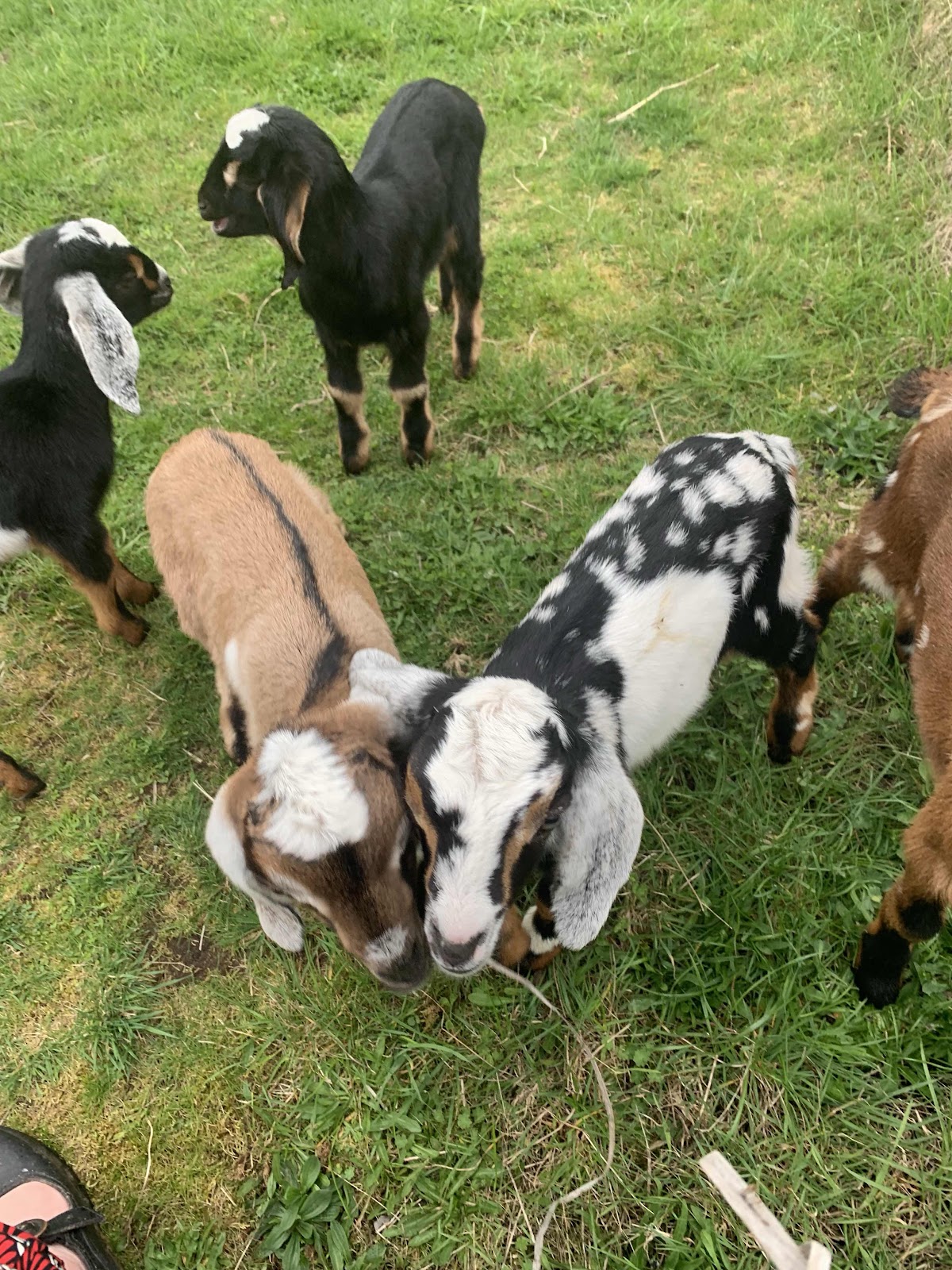 First, please enjoy this photo of adorable, healthy baby goats frolicking in the springtime, all right with the world. This is the reality for 8/9 babies born this year, and that’s not such a bad outcome.
But now -

This photo of the bite inflicted on baby number nine by my very own dog. There’s a story here - hold on before you condemn the canine.
The last mama goat to give birth was Polly, last Thursday evening around 5 o’clock. She had a lovely set of twins, who both stood up and nurses with no problems, a boy and a girl. I was thrilled. However, when Homero went out the next morning to do chores, he found another baby in the ground, still wet and gooey, who had apparently been born quite recently.
For those of you who aren’t goat breeders, it’s not normal at ALL for there be such a long delay between kids. No matter how many kids are in there, a normal birth usually takes an hour, maybe an hour and a half, tops. So this little guy was off to a rough start. It seemed he had aspirated some amniotic fluid. His lungs rattled and he was very weak. He couldn’t stand up by himself, and his mama ignored him.
That’s a bad sign. I always pay attention to the mamas, they seem to be able to tell better than I can when a baby is not very viable. However, he was alive, so we went to work to get some colostrum into him. Throughout that day we bottle fed him every hour or so, and although very weak and coughing, he was getting some down.
But there was clearly something wrong with him. His head was swollen, whether from the hard birth or whether malformed in some way was hard to tell. He stayed standing if we stood him up, but he couldn’t get up on his own and he didn’t try to walk.
We had plans to go away for the weekend. I asked my good friend K., goat rescuer extraordinaire, if she wanted to try to care for him over the weekend. I let her know he was poorly and might not make it. She did want to, and in her usual way she went to work on him.
She noticed, however, that he seemed to have a small wound on his leg. When she washed it and shaved him, it turned out not to be a small wound after all but a pretty serious dog bite. Overall the weekend, it got infected despite her care. When we got home, she let me know she thought the baby was suffering.
I picked him up and took him to the vet. My gut instinct told me that the little guy was in his way out and I thought he should be put down, but I wanted to give the vet a chance to weigh in. There’s always a possibility he or she might say “no, no, all he needs is a course of strong antibiotics.”
But my instinct was right. The vet told me his leg was actually broken, and that he seemed to have some neurological damage as well, whether from the hard birth or for whatever reason. His lungs were crackly with pneumonia. He had several complex problems. It went far beyond a course of antibiotics.
And truthfully, that’s about all I was willing to invest in this kid. Even if he lived, he was still marked as a meat animal. If he wasn’t going to enjoy his year or year and a half on earth as a happy, healthy member of the herd, then it’s better to put him out of his misery right away. Which is what we did.
As for Haku.... well, I’m fairly sure he wasn’t trying to kill the baby. After all, if a 95 pound German Shepherd wants to kill a newborn baby goat, he generally can do it without much effort. And Haku is so very, very gentle with the babies. He only wants to lick them all over. My guess is that he was attempting to help.
Baby goats hide. In the barn, they hide behind hay bales. That’s their instinct. When Homero found this little guy he was hidden behind hay bales. I think Haku was trying to drag him out of his hiding place. My sister has a livestock guardian dog and she told me that he once injured a baby goat doing exactly that.
In any case, there is one less baby goat in the world now. Poor little guy. But it’s good news for his mama, who now only has to raise twins.

Posted by Aimee at 5:37 PM 0 comments Links to this post