Practicing Thankfulness (a look back) 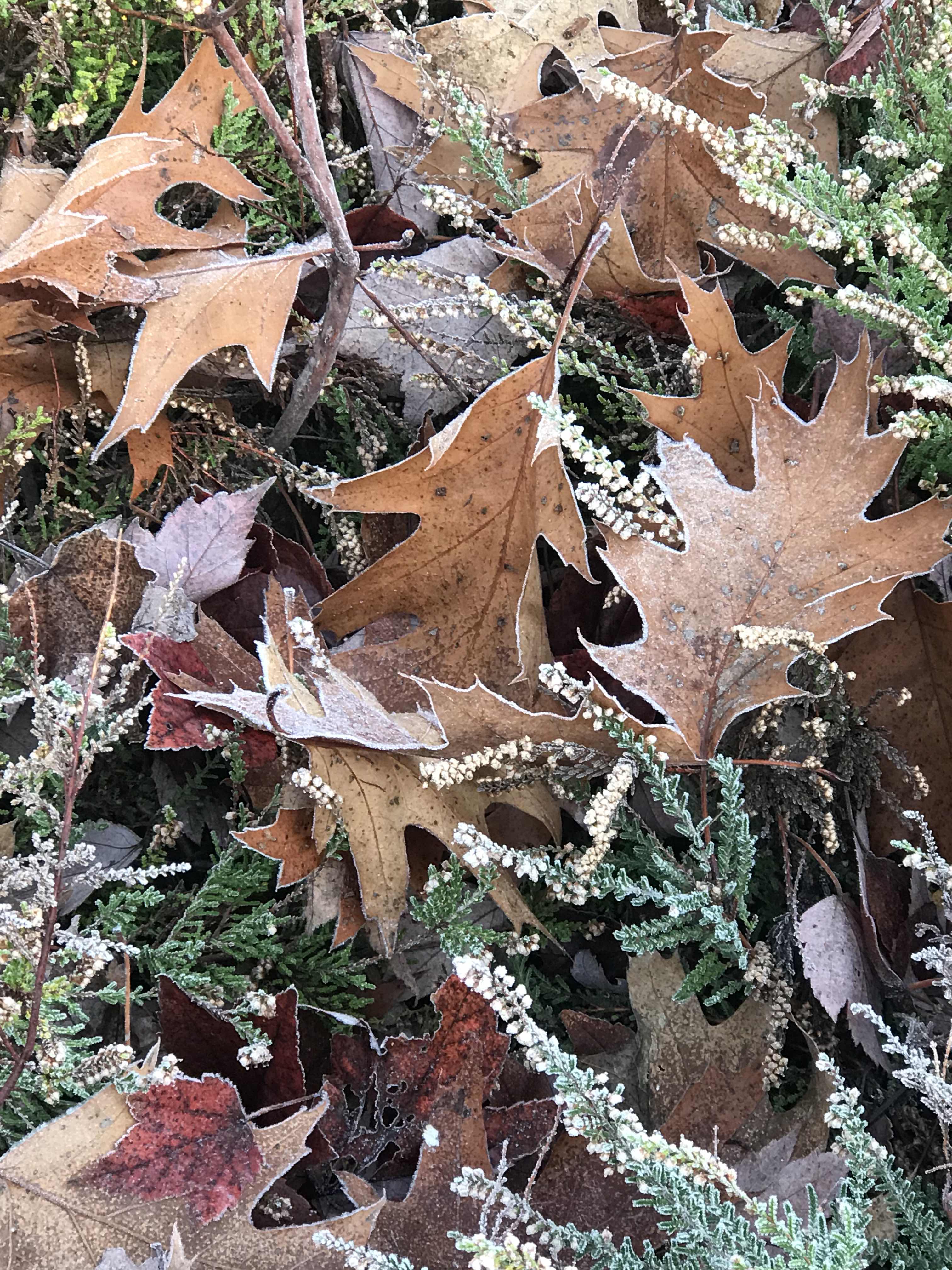 A repost from a few years ago follows.  Although we have no turkeys this year, and many other things are different as well, it’s always, always, always good to give thanks. And sometimes, if I have a hard time coming up with things I am presently thankful for, it’s good to be able to look back on this blog and find what I was thankful for in another time.
So right now, I’m thankful that I have diligently recorded my seasons on this piece of land. I’m thankful for my own past hours spent on that endeavor. I’m thankful for the technology that lets me easily and quickly find the bits of my writing that I am looking for, or to peruse those I have forgotten I ever wrote. I’m thankful for the technology that lets me record and share the beauty of this place I live in. I’m grateful for my artist’s eye that lets me see beauty in my mundane surroundings, like the frosted leaves above, and for the ability to share that frozen moment with all of you.
Here’s what I was grateful for in November of 2013.
1) The turkeys. We will be eating our own bird thursday, a beautiful creature who dressed out at 19 pounds. I sold two other turkeys, for $4/lb, a very decent price. Well, one of them I accepted half cash and half groceries, and some of those groceries will be on the thanksgiving table as well. In particular, I'm thankful for

2) the quart of dried morels I accepted as partial payment. I love wild mushroom gravy. The last turkey I decided to donate rather than stash it in the freezer for Christmas or something. Calling around, I found out that

3) the Lighthouse Mission in Bellingham will be serving a Thanksgiving meal on friday for those who missed out on the big day. I'm thankful they are doing this, and also that they can legally accept my turkey. Anybody looking for an easy way to help out the homeless and hungry this year could do worse than to donate to this hardworking organization.

4) I'm thankful that my mom is coming up from Seattle and we will have a crowd of family around the table. I'm sorry my sister won't be here, but I am thankful that

5) I don't have to make a gluten free, dairy free Thanksgiving meal.

6) I'm thankful that the buck is sold and the boarded does are gone home and that all my goats are probably pregnant and that goat breeding season is over for another year!

7) I'm grateful that the cold snap is over and I no longer have to water the animals with a five gallon bucket but can go back to using the hose like a normal person.

8) I'm grateful for my nieces, who are sweet, cheerful, hardworking, and funny. They are doing so well in school and making friends. I am grateful they are enjoying their time here and I'm so grateful for the trust that their parents put in me and Homero. It's a blessing.

9) I'm thankful for the beauty of my part of the world. I'm so grateful to be able to look out my window and see the mountains and the trees and the sky. I'm constantly amazed at the natural beauty with which I am surrounded.

10) I'm thankful for this house, drafty and creaky as it is, it's still shelter, and it's home.

Posted by Aimee at 11:21 PM 0 comments Links to this post 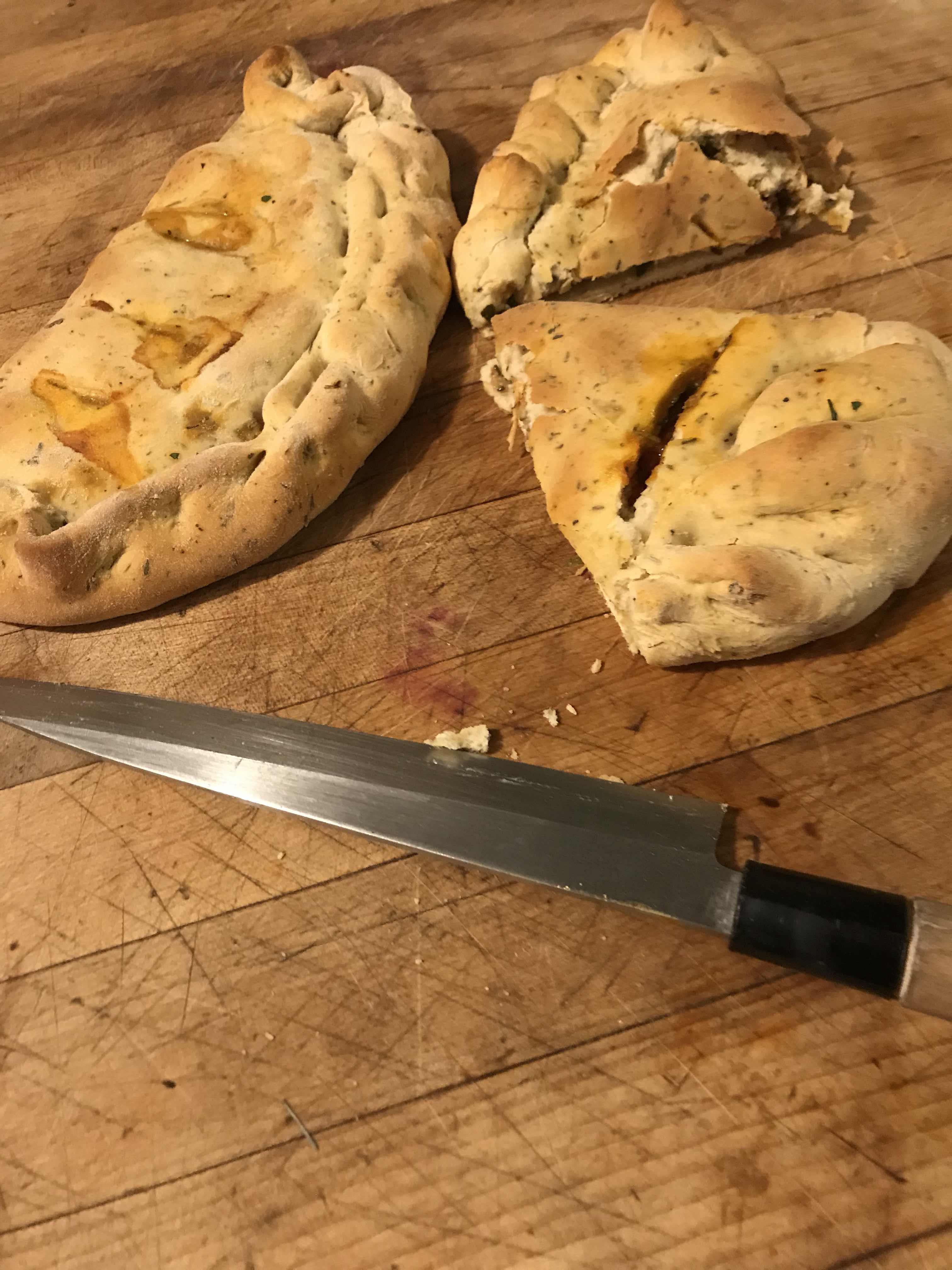 April and May is goat cheese season, year after year. This past spring, however, I spent even more time than I usually do making cheese. That was because I knew that we would be spending the two months of high summer far from home, in Oaxaca. Whereas I would usually use most of the milk making fresh, easy to make and easy to use simple cheeses like queso fresco and chevre, this year I made more hard cheeses, intended for storing.
My hope was that I could make enough hard cheese, and store it effectively enough, to have cheese in the late summer and fall when we came home. I made mostly cheddar, with and without flavorings such as chives and red pepper flakes, and I used my vacuum sealer to seal it up and store it in the fridge over the summer. In past years, I haven’t had great luck with this method - the cheese inevitably molded even inside the vacuum sealed pouches. This time I took more care to cure (air dry) the cheeses well before sealing. Then I packed them into the coldest part of the fridge, crossed my fingers, said a prayer, and flew away.
Upon our return I was delighted to find that none of the packages showed any signs of mold. The seals were tight; thee was no evidence of air inside the bubble, and when I opened a package, the cheese smelled fresh and good.
However.
However.
I still wasn’t happy with the “final product.” In my mind, an aged cheddar should have a distinct taste and texture  - “sharp,” piquant, and maybe a bit crystally, ever so slightly crunchy under the teeth. It ought to melt well. It ought to smell wonderful, and to be appetizing even to those who aren’t the biggest fans of aged cheese. At the very least, it ought not to be offensive to the taste (except to those weak-stomached fools who hate any strong flavored cheese).
The cheeses I have opened so far have been a bit hit or miss, according to these criteria. Mostly, they do melt well and have a very good texture. The problem is their extremely strong, rather goaty flavor. The “goaty” flavor in aged goat cheeses is due to certain compounds known as Caprine flavor compounds. Apparently, they tend to concentrate over time. What went into the fridge in May as a nice, smooth, mild-mannered green cheddar came out in September as a rugged, aggressive, stinky, crumbly goat cheese. It is simply not something that most people - more to the point “we” - would choose to eat as a stand alone product.
That’s disappointing of course. I’ve made myself eat a few slices on crackers, with grapes or apples and the soothing influence of fig jam or plum preserves, but it just isn’t a truly pleasant experience, if I am honest. So I am left with the question of what to do with several pounds of extra-strong stinky goat cheese that represents a silly number of hours of labor that I am simply not willing to chalk up to experience and toss in the trash.
Today I solved that problem by making calzone. I had some herbed pizza dough courtesy of the gleaner’s pantry, and our own pantry provided various strong flavored ingredients such as kalamata olives and marinated artichoke hearts, with which I intended to mask the Caprine compounds.
Paloma helped me roll out the dough and I took the opportunity to educate her a little (read, bore her to tears) about the historical necessity of making do with whatever ingredients were available, regardless of their objective edibility. For most of human existence, nobody had the luxury of turning their nose up at “stinky” food. Willingness to eat what was available was quite literally the difference between life and death, or at least between health and malnutrition.
“Some people in Greenland had to eat fermented seal guts,” I told her, “and eventually, it became a delicacy. Necessity is the mother of invention.”
Her expression showed me she wasn’t convinced.
“It’s always been a woman’s job to take whatever was at hand and turn it into something, if not delicious, at least something that her family would eat,” I continued. “And that’s the origin of haute cuisine. Seriously - all culinary creativity is based on using the dregs, the ugly bits, the stinky bits, and making it beautiful and desirable.”
This, as I grate the too-stinky-to-eat goat cheese onto the rolled out calzone dough, and cover it with chopped olives, artichoke hearts, parsley and marinara sauce. I tell Paloma, and I cross my fingers that I’m not lying, that the cheese’s too-strong flavor will, in the company of all these other flavors, enhance the calzone and actually be an asset to the finished product.
I’m sure that dozens of generations of women have made this same argument to their skeptical families regarding dozens of equally dubious ingredients. I mean, seriously. Natto? “Thousand year eggs?” Shrimp paste? The first Gorgonzola? We ladies have simply had to brazen it out, and time and history have largely vindicated us. Except for the fermented seal guts.
The verdict on the calzones was that they were delicious. The goaty flavor of the cheese melded well with the salty, briny olives, and all the calzones disappeared with alacrity.
One cheese down, several cheeses to go.