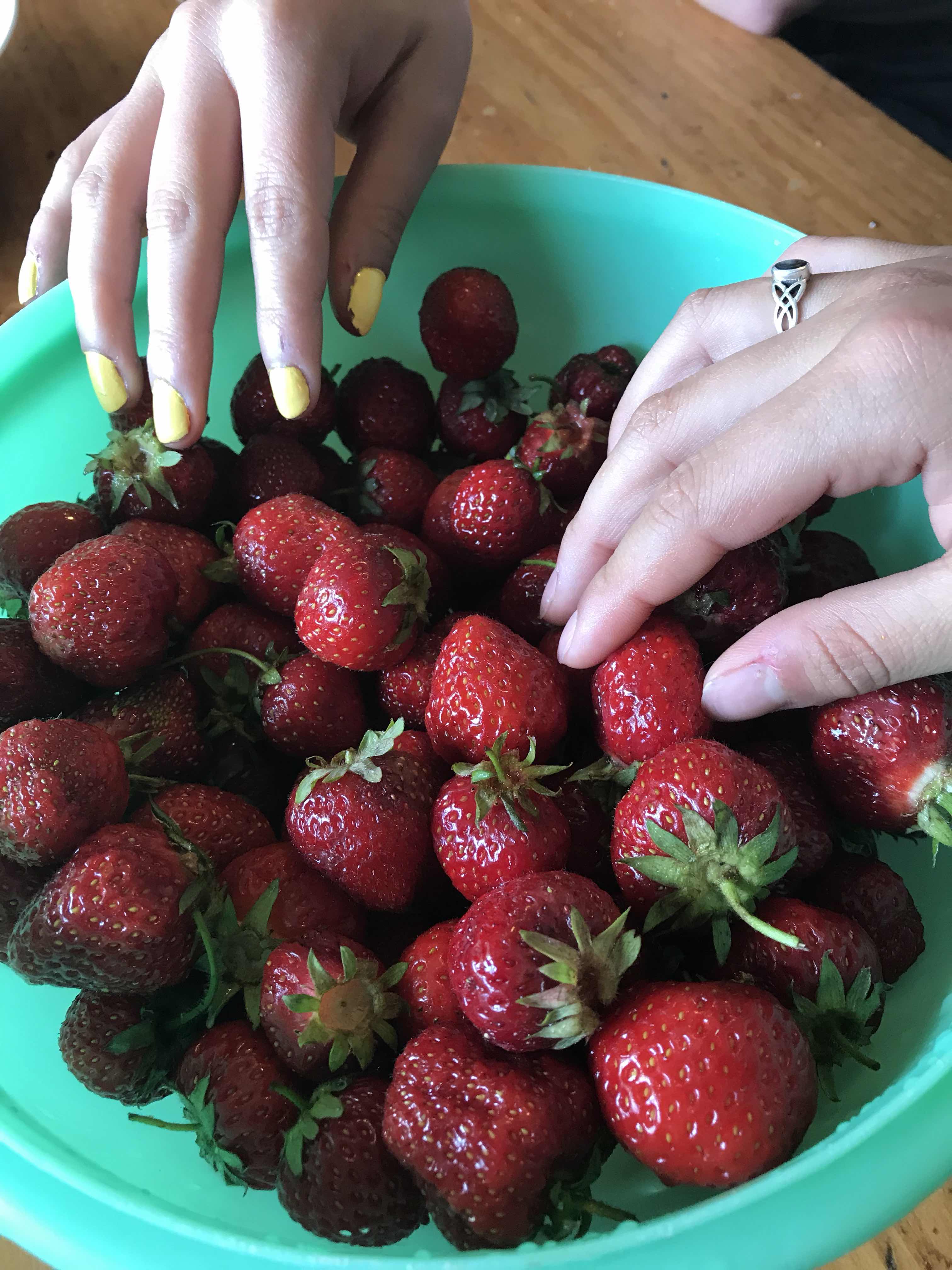 Posted by Aimee at 6:59 PM 2 comments Links to this post

Dairy goats are plagued by parasites. It's just a fact. Some areas of the country are worse than others, and in some areas resistance has become a problem; in other areas its less serious. But anyone who raises dairy goats will have to develop a parasite protocol and be on the lookout for signs of infestation.

I've had my troubles with parasites before - our wet weather and lack of hard freezes some winters contributes to the issue. We've had lungworms and stomach worms and coccidia. For the most part, these have been passing problems, and with vigilant treatment otherwise healthy goats shake off the effects and continue to thrive. I do know by now, however, what a wormy goat looks like.

-Diarrhea. Primary symptom. May be intermittent or constant.

- Skinny. Weight loss is the main symptom (after diarrhea) and it happens not just because the parasites leech energy from the host, but because if the host is losing enough blood they will become anemic and then the rumen doesn't get properly perfused, doesn't work correctly, and you get malabsorption syndrome. Then it doesn't matter how much quality food you are feeding, the goats can't benefit from it.

- lowered milk production, if they are in milk

- rough, coarse coat. I don't know why this happens.

In the middle of winter, when it's cold, and all the forage is gone and the goats are subsisting on just hay, and they are pregnant, it's fairly normal for them to lose a little weight. But they shouldn't get really thin. This past winter my goats kept losing weight no matter what I fed them. In fact, they were skinny as rail fences, and generally looked run down and wormy. They started pooping green glop, instead of nice clean pellets. I figured I had worms and dosed everyone with the standard medicine, Ivermectin.

When they didn't improve after some time, I repeated the ivermectin, and when they still didn't improve I thought I might have some resistant worms on my hands and switched to a different wormer that works by a totally different action.

Well they just kept losing weight. Spring came, they gave birth (Flopsy to quadruplets again) and the babies were all healthy, but the moms went downhill, trying to feed all those insatiable little monsters. I brought fecal samples to the vet and, maddeningly, they came out clean. Negative for everything. Repeat fecals came out clean as well.

I discussed the issue with my vet, on the phone, but all he suggested was increasing their ration of grain and buying some alfalfa hay. He seemed to think it was a feed issue, and indeed it certainly looked as though my poor goats were starving to death. He said "Parasites are not your problem," but I knew he was wrong. I know an anemic goat when I see one.

I don't know when the light dawned. Maybe it was when spring was far enough advanced that I started letting the goats out to graze in the front, and began spending a lot more time in close proximity with them than I did in the winter, when I would just go out for a few minutes twice a day for chores. I noticed that their coats weren't just rough, but that they actually had bald patches and that they were rubbing themselves along the fences. BINGO! A lightbulb went off in my head.

Not all parasites are internal. There are external parasites as well. Lice. Probably brought here by the buck I used to serve them last fall.

As the parent of three children who went to public school, I have had my fair share of experience with human head lice. As obnoxious and disgusting as they are, in people, lice are not dangerous. They do not carry and dangerous diseases, and being confined to a small percentage of our total surface area, they can't really suck enough blood to do us great harm. In goats, however, the case is different.

A serious lice infestation can act exactly as a serious internal parasite infestation - the insects can suck enough blood to cause serious anemia, and then all the sequelae are the same as that of a worm-induced anemia - malabsorption syndrome, weight loss, even death by starvation. My poor goats were being sucked dry by thousands of tiny vampires.

Luckily, the treatment is easy and cheap. It's actually the exact same medicine used in people - Permethrin - but at a higher concentration. You can buy it at the feed store under the name "Ultraboss," You dose the animals at 3mL/100lbs at a 5% concentration, laying down a line along their spines, just like applying flea medicine to dogs. As in people, it requires a minimum of two doses given two weeks apart, because Permethrin kills live lice but not eggs. Now my goats have received three treatments, and I may still have to give them a fourth. This was a very heavy infestation.

Almost immediately they began to improve. Their energy level went up quickly, and they began to gambol about and bounce like healthy goats do, instead of hobbling around arthritically. Milk production skyrocketed (another post will follow - I am drowning in milk). Their coats began to fill out and regain their gloss. Only the diarrhea is still hanging around. I think that probably the severe anemia actually did some damage to their rumens and it will simply take some time for them to heal and perform optimally again. That's just a supposition. If the diarrhea persists for another couple of weeks, I will have to bite the bullet and actually have the vet out to look at them.

But for now, I feel pretty proud of myself. Yes, it took me a while, but I diagnosed the problem despite poor veterinary advice, and was able to treat my ladies and help them get better. It makes me trust my eye and my instinct better than before. Little belittle, I am becoming a real farmer.

for more information about lice in goats:

Posted by Aimee at 8:07 PM 0 comments Links to this post

The Annual Opening of the Blackberry Blossoms 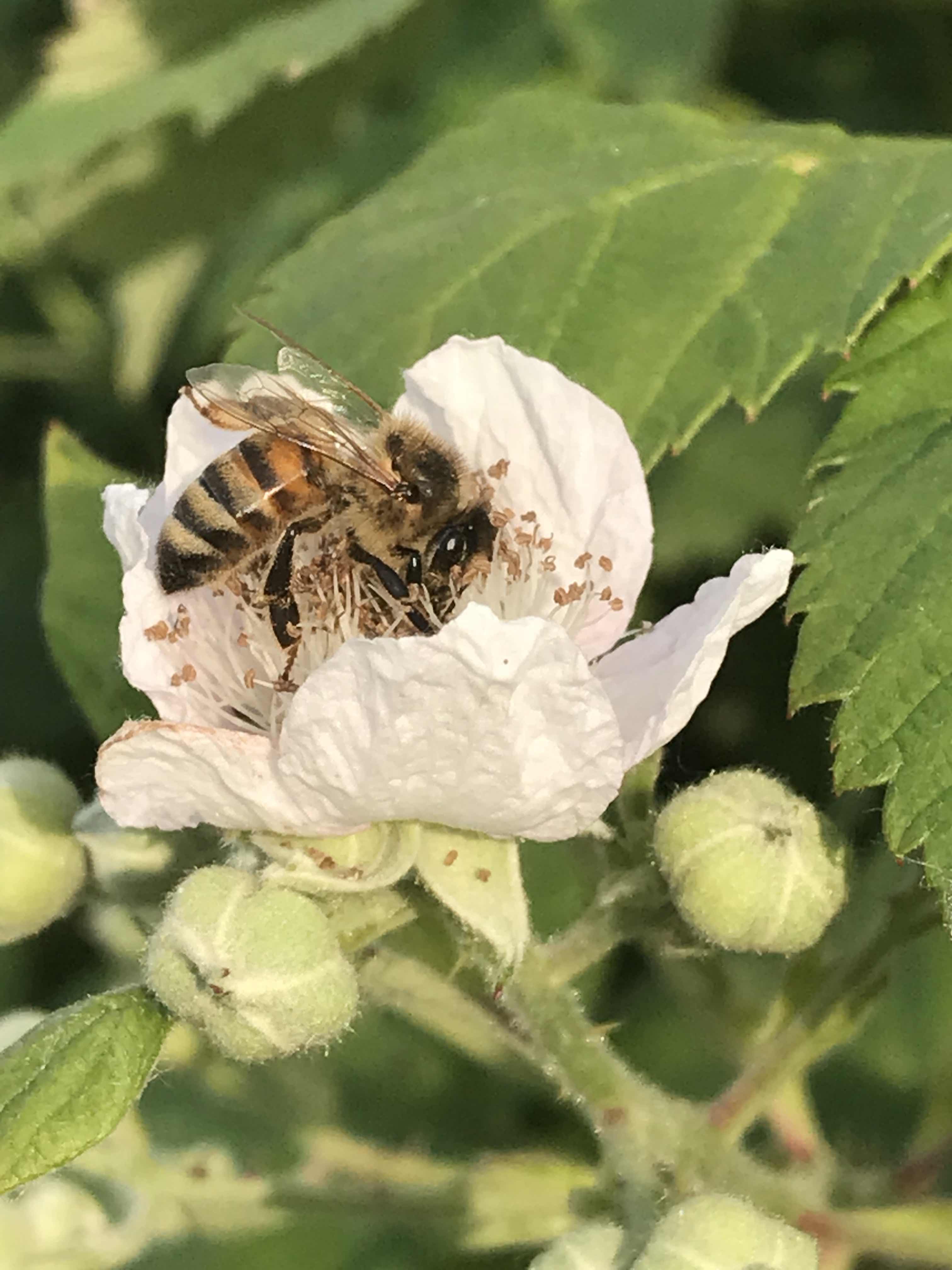 Posted by Aimee at 8:20 PM 0 comments Links to this post