As usual, I have a couple of different fermentations going on in the kitchen. At this point in time, after years of tinkering and experimenting, home-fermented foods are simply an everyday part of our diet - which is as it should be. Fermented foods have been an integral part of the diets of people in all parts of the world for centuries, if not millennia.

Fermentation is the answer to many problems - how to preserve fresh vegetables through the winter; how to turn easily spoiled milk into delicious, storable cheese and yogurt; how to increase the digestibility and the vitamin content of tough root vegetables; how to get drunk and party through a long, drab, grey season.

Fermenting  is a traditional and easy way of preserving fresh vegetables through the cold season in four-season climates, like northern and Eastern Europe where most of my ancestors came from. It is the only method of preservation that actually increases the nutrient content of the food being  preserved. Bacterial action produces high levels of B vitamins, including the hard-to-find B12. 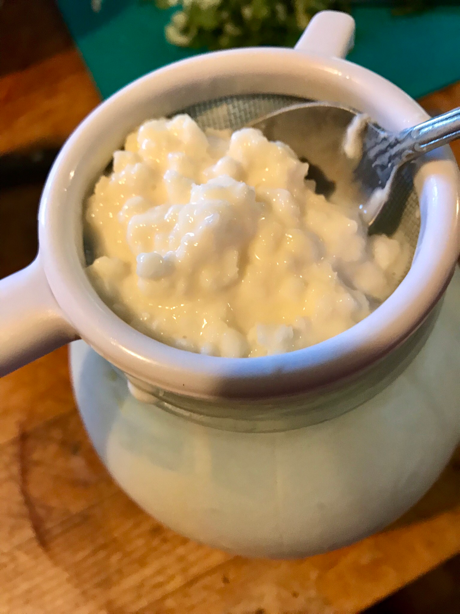 My Kefir. A few years ago I bartered for some kefir grains and was sadly disappointed to learn that I couldn't put them in fresh, raw goat's milk. When I tried that, they died overnight. Turns out - as I could have learned from a very short investigation online - if you want to propagate a particular SCOBY (Symbiotic Community Of Bacteria and Yeast), you need to cultivate it in a relatively sterile medium. Raw milk is chock full of it's own community of bacteria and yeasts, and they are stronger and more vigorous  than whatever you are trying to grow. I was basically starting WW3 every time I put a few kefir grains into raw milk. And my soft, domesticated culture lost every time. The kefir grains I bought turned into sludge and disappeared.

The last time we went to Oaxaca, two and a half years ago, I got new kefir grains from my mother-in-law. She calls them "bulgaros" and she calls the product they create "yogurt." In fact (or at least in English) yogurt is something different - simply milk cultured with certain bacterial strains, and it can be propagated indefinitely just by adding old yogurt to new, scalded milk. Kefir is a different animal - a SCOBY. You can make new yogurt from old yogurt, but you can't make new kefir from old kefir. You need the SCOBY - the grains.

These look like little niblets of cauliflower. Keeping them alive and growing is fairly simple. Put a tablespoon of kefir grains into a pint of pasteurized milk. Let sit for 24-48 hours. Strain. The thickened, digested milk that you strain off is kefir. Wash the grains in water several times, swishing and draining. Then place in new milk. Some books will tell you to wash the grains in milk, and not water. Don't believe them. When I did that, the grains melted over time into sludge. As soon as I started washing them in water every two days, they grew amazingly. Which is what my mother-in-law had been trying to tell me, but for reasons of cultural imperialism and white privilege I had been ignoring her wisdom in favor of some white dude who got published. If you are lucky enough to have access to an intact system of food production, utilize it! Go figure. 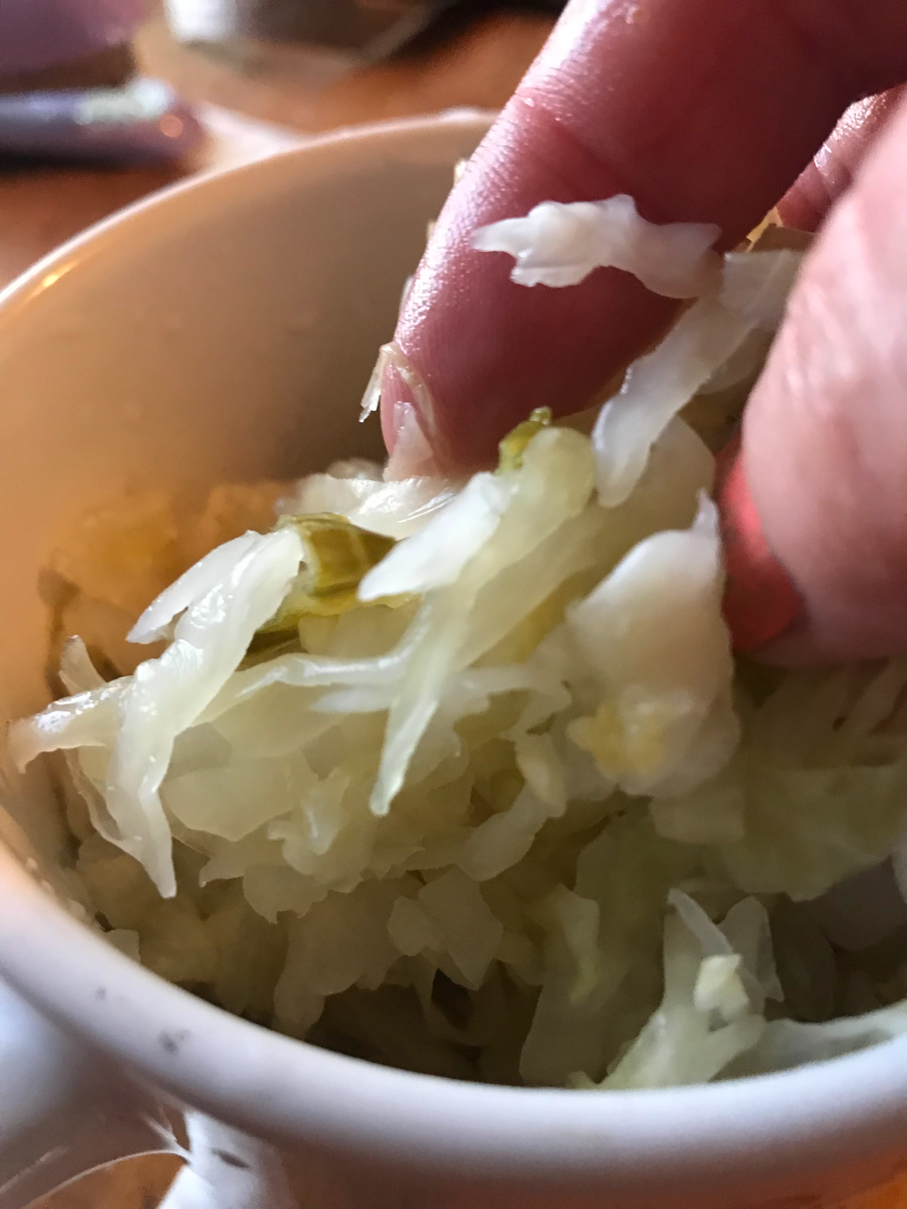 Sauerkraut. I probably wouldn't make sauerkraut very often except that my daughter Hope loves it. I like sauerkraut just fine, but its not what I would call a staple food. It is, however,  one of the easiest and cheapest ferments One head of green cabbage, and one or two tablespoons of salt, depending on the weight of the cabbage. Shred cabbage finely , massage with salt, pack into a glass jar and pound down tightly with a wooden pestle. Let sit on the counter at least one week, then test for sourness. If you like the taste, rinse quickly under running water, squeeze, and pack into smaller ja and put int he fridge. 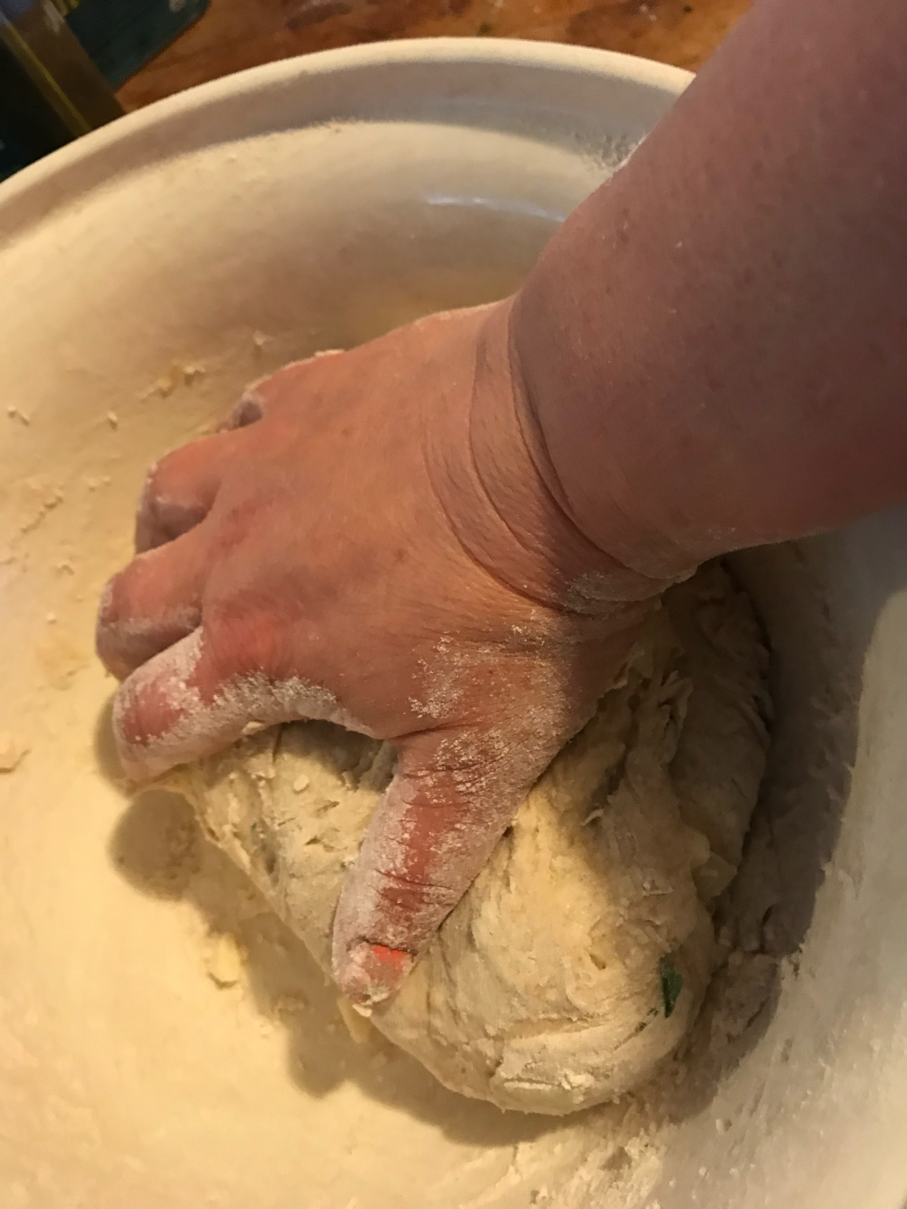 Making bread. I lost my sourdough starter several months ago. This is a quick focaccia bread, made with store-bought yeast. Still yummy, however. I love baking, it makes me happy and nothing makes the house smell so good.