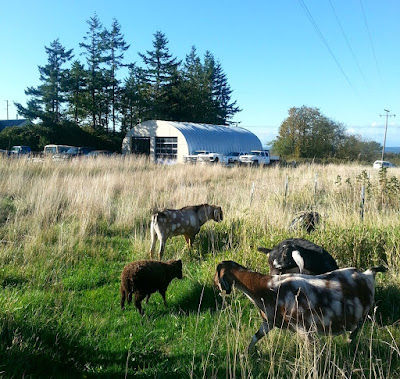 The little brown blob in the lower left foreground of this picture is a young Jacob's sheep. She is about four or five months old, and wads given to me by my sister in exchange for babysitting her children for a weekend so she could go away with her husband. For the record: I would have babysat in any case, but once offered, I wasn't going to turn down a free sheep.

Jacob's sheep are those funny four (or even six) horned breed. They are an ancient "unimproved" breed, meaning they have not been highly selected for any given trait or developed for commercial purposes. Until recently, they were usually only found in the U.S. among Native American herds in the southwest. Sometimes they are called "churro" sheep. 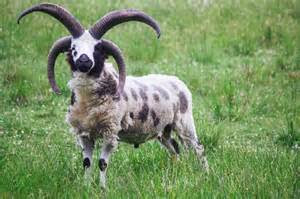 As such, they vary widely from herd to herd, but in general they are small (a ewe reaches approximately 80-100 pounds) and have good quality wool and lean meat. You can see how small the little ewe looks next to my Nubian goats.

I was afraid my goats would bully her terribly, but it seems not. I brought the lamb home last night and shut her up in the Mama Barn for the night. This morning I went to the Gleaner's Pantry and so I wasn't around when Homero let her out to mingle with the goats. It seems to have gone well, though. This afternoon - a beautiful sunny warm September afternoon - when I let the goats out, I tried to keep the sheep in the pasture because I didn't know how herd able she was. At my sister's house she lived in a small enclosure and nobody ever tried to herd her in an open space.

After twenty minutes or so of enjoyably perusing my magazine while the goats grazed, I heard the sheep bleating plaintively from a direction incompatible with her being inside the pasture fence. The little thing was apparently able to squeezed through the gap between the gate panels and get out onto the front lawn. She simply followed the goats around, any stayed close to them even though the does occasionally butted her in the side.

Our plan is to keep her over the winter - hopefully she will grow well - and then shear her in the spring. Rowan is interested in her wool. Then we will let her fatten a bit on the spring grass before we turn her into lamburgers. Lamb is actually my favorite meat. I never buy it at the store; it has become so terribly expensive lately. I'm looking forward to having some put away for our personal use.

It's hard to tell when you're referring to single vs multiple sheep. I propose a single sheep be called a shoop henceforth.

No, the singular is "ship." So: "the ship is full of sheep" might refer to a sailing vessel carrying ovine critters or to a pregnant ewe. Conversely "there's a ship on that ship" could mean two stacked ovines or a single one on a sailing vessel. Oh, and the collective noun is "school."

Yes, totally joking worth my brother :)