How Much is a Good Goat Worth? 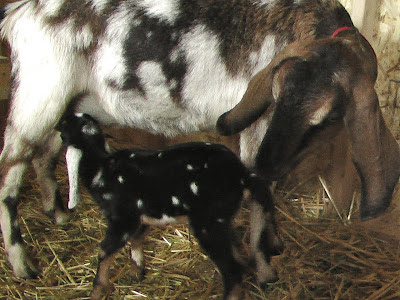 Iris was the first goat on the farm. I bought her in 2007, as soon as I had a fence up and a place to keep livestock out of the rain. We moved in in August or September, and I was determined to have baby goats our first spring; so I advertised for a pregnant doe. I didn't care much about breed, I just cared that she was healthy, and pregnant.

I lucked out. A lady goat farmer nearby answered my ad - she had a young doe pregnant for the first time - a first freshener, as they are called - a Nubian, with a fine pedigree. Registered, tested for all of the local diseases, and guaranteed. Later I found out that this lady farmer actually raised locally famous goats, winners of many prizes at regional and state fairs, and that her animals were extremely well regarded among local goat folks in the know. If I had known that at the time, I suppose I might have sprung for the extra $50 she wanted to give me Iris' papers. But I didn't know that, and I didn't care, because I wasn't thinking in terms of the future monetary value of kids born on the farm. I thought - I'm a homesteader, not a breeder, so what do I care?

However, I didn't know the future, and Iris was quite expensive enough as it was. I paid $350 for her. That struck my husband as a rediculously exorbitant price. And even today, I can say that yes, that's pretty expensive. I routinely sell goats for less than $100. Male goats. Females are usually sold for between $150 and $200. The best price I ever got for a single goat (not pregnant) was $250, for an adorable spotty female kid, who had been disbudded and vaccinated.

That was one of Iris' kids.

Iris, over the years, has produced some 15 kids. I'd have to look at the blog to be certain exactly how many. Some of them were sold for a good price; some of them were eaten as meat; and a couple of them died without producing any value whatsoever. At least one cost us a lot in veterinary bills before he expired. If I average out the value of her kids - not an easy task, considering the calculations involved - I'd guess that each one was worth about $30. All told, her kids were worth about $450.

Now let's talk about milk. It's impossible to set a firm value on a gallon of goat milk. For one thing, I can't sell it. That is highly illegal, and I've never waded into those waters. However, I can say that a gallon of goat milk, if purchased in my local market, is worth approximately $12. I would never BUY a gallon of goat milk on the local market, so I can't really say that it's worth that much to me. I suppose I can call it "fair market value." However, to make calculation easier and to reflect more accurately the realities of my farm, I'll give each gallon of milk a value of $10.

I will not, because the math gets ridiculous, attempt to set any higher value on the cheese I produce. I could easily get lost in the intricacies of attempting to put a reasonable value on my cheese. I have, over the years, traded a pound of cheese for products ranging from a loaf of bread (value: $2?) to three fat dungeoness crabs (value: $50). I've traded cheese for smoked salmon; for cedar chips; for kale; for blueberries; for babysitting; for hay. The best I can say is that goat cheese is a commodity of highly variable worth. Therefore I will just calculate the worth of milk.

Well, that's a silly number. I can say with absolute certainty that I don't receive anything like that much in concrete benefits per year. Especially when multiplied by the three does I milk most years. However, we do save a great deal of money by not buying any milk, yogurt, or cheese for most of the year. Also, excess milk goes to feed the pigs and the chickens, which in turn saves us money on meat and eggs.

You can see that the worth of a good dairy goat is a hard thing to calculate. Iris has been providing my family with meat in the form of her kids and with milk and cheese for some 8 years now. She has been fertilizing our land with her manure, and providing weed control. She has also provided us with many hours of entertainment, and with affection and joy. Her kids are not simply walking bags of protein, but creatures that jump and play and are absolutely adorable and beautiful. There is simply no way at all to calculate the happiness evident in the face of my youngest child, below, cuddling one of Iris' newborn kids.

I give up. I cannot put a price on a good dairy goat. Here's what I can say for sure: Iris has earned her retirement, and should she never produce another kid or another gallon of milk,  we will care for her until she dies of old age. 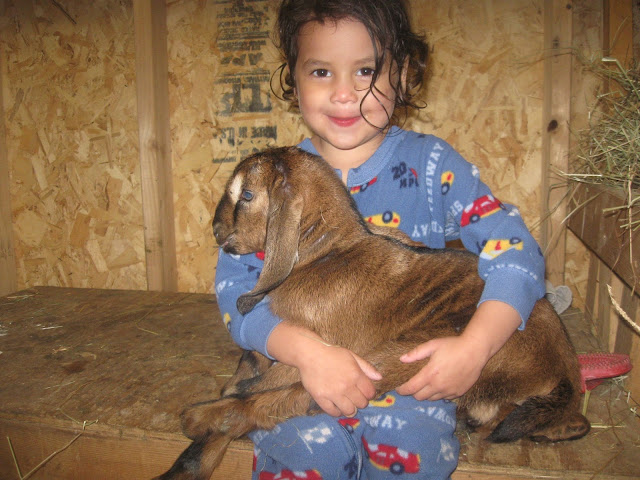