Just installed Blogger on my phone - seeing if thus old luddite can figure it out. 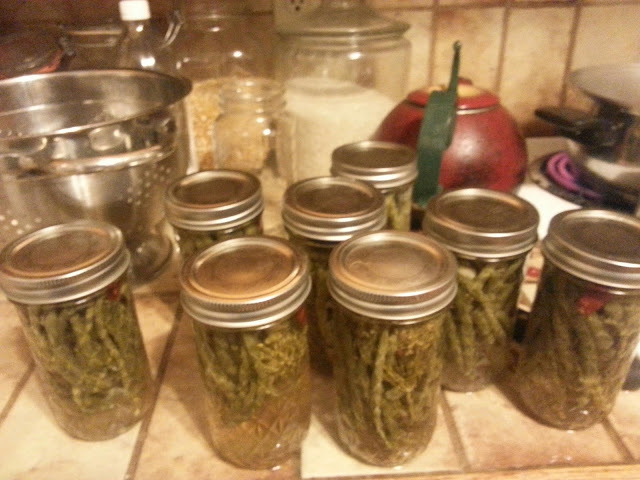 Posted by Aimee at 10:08 PM 1 comments Links to this post

Tomato Slavery (Canning for my Soul)

Ever since I first moved to this farm, one of my main motivations for raising animals and putting in a garden has been to try and eat more ethically. I think this is a common concern - most of us care about the ethics of what we put in our mouths and most of us make some sort of effort to source our food with ethical concerns in mind.

For some of us, our paramount concern might be animal welfare, and our concern might lead us to vegetarianism, or to sourcing ethically raised meat. Some of us eat all organic, not just for our own health, but for the planet's health. Most of us try to avoid eating endangered species, and look for sustainably harvested seafood. Recently, many people have become concerned with the carbon footprint of their diet and look for locally produced food that isn't trucked or flown thousands of miles from the point of production.

These are ALL laudable goals, and what I am about to post is in no way meant to suggest that anybody ought to abandon their priorities for mine. We all do what we can to behave ethically - I hope - and I firmly believe it is impossible to refrain from all evil in all our actions.

That said - consider this quote:

"Since 1997, the Justice Department has prosecuted seven cases of slavery in the Florida agricultural industry — four involving tomato harvesters — freeing more than 1,000 men and women. The stories are a catalogue of horrors: abductions, pistol whippings, confinement at gunpoint, debt bondage and starvation wages."
(for the rest of the article, see here)

Did you catch that? Here in these United States, in the past couple of decades, there have been cases of SLAVERY so egregious that they have been prosecuted as such by the Justice Department. Not "Wage Theft;" not "exploitation," but SLAVERY. For those of you who won't follow the link, the article details the commonplace practices of imprisonment, of people being forced to work at gunpoint, of hostage taking and threatening the families of those who try to escape. For the each of the seven cases that were prosecuted, there were (and are) literally thousands of cases that are never documented.

Following are two more links. I especially recommend the first. It was originally published in Gourmet Magazine in 2009, and it was the first time that the problem of widespread slavery in our agricultural system got serious mainstream press. It is the article that opened my eyes to the scale of the problem.

More recently, there has been news coming out about conditions on tomato farms in Baja California in Mexico. Nearly all of our winter tomatoes in the US come from either Florida or Baja. The large plantations in Baja are not owned by US companies, but they are contracted to large US companies and those companies have moral responsibility for the conditions, which are, again, tantamount to slavery.

This past winter and spring, farmworkers on these plantations have begun to protest the practices and conditions - enforced confinement behind barbed wire and electric fencing; forcing workers to purchase all of their food and water from the company store, which charges exorbitant prices and puts the workers into debt-slavery; lack of running water or plumbing; and as retaliation for protesting, beatings and starvation.

The LA Times ran an expose on the situation, which you can read here:

Aside from labor practices (what a tame and euphemistic phrase), our current system abuses farmworkers by poisoning their bodies with pesticides which they must apply to the fields, often with inadequate or nonexistent protection. The wells from which they must drink are tainted. Their children are subject to birth defects and chronic illnesses as a result of exposure to dangerous agricultural chemicals (see: http://afop.org/wp-content/uploads/2010/07/Annual_Publication_FINAL_English1.pdf)


In short, I have come to a decision. This decision is going to cost me a lot of time and effort. I have decided that I can no longer purchase tomatoes from Mexico or Florida. I realize that it is impossible for me to entirely wash my hands of my participation in our evil (yes, I said evil) agricultural system. Just as I cannot utterly refrain from the evils of the systems which produce my clothing, electronics, or transportation needs, I cannot keep 100% "clean" in my food choices either. It's simply not possible. But I can make a few choices that make me feel better, even if they do not do much to dismantle the systems themselves. This is one of those cases where the only effective action is collective action, yet I can only take individual action.

We eat a lot of tomatoes. After onions, I think tomatoes are probably the single most important vegetable ingredient in my pantry. They go into at least a third of the meals I cook at home. I will continue to buy tomatoes when I can verify that they were produced locally. And I will continue to accept tomatoes from the Gleaner's pantry, no matter where they come from. That is because - similarly to buying secondhand goods - my using those tomatoes does not materially benefit the producers. Exactly zero of my dollars are going to the growers if I collect the tomatoes after they have already been thrown away.

But if I want tomatoes in the months of November through March, I am going to have to preserve them myself. That means I am going to spend a large number of hot August afternoons washing, blanching, peeling, dicing, and canning tomatoes. If I can get my hands on small Roma tomatoes, I can freeze them whole, which is the easiest way of preserving tomatoes. But no matter what, my tomatoes are going to be more expensive from here on out - expensive in terms of time, certainly, and maybe money too, if if we factor in electricity and canning jars.

But what price, after all, a clean conscience? Moderately clean. at least. Moderately.

Harvest Ethics (Am I a Thief?) 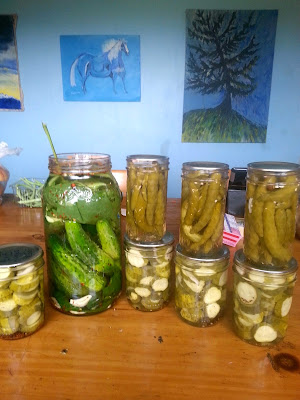 Returning from Tucson at the beginning of the week, I found that the High Harvest has definitely begun, as signaled by the traditional anonymous box of squash left on the front porch. Last night's dinner was squash fritters topped with goat cheese. Now there are only six big zucchini left to deal with (until the next influx, anyway).  I will probably do what I did last year and bake a bunch of zucchini bread for the freezer. I defrosted the last of last year's zucchini loaves a few days ago, and it was in perfect condition. The trick is to wrap the loaf tightly in aluminum foil and then place in a ziploc bag. There are still a few cups of organic pecans in the cupboard leftover from a trade several weeks ago, and the zucchini bread plan will use those up as well.

Pickling cucumbers have appeared in the stores, and so I made a bunch of pickles. Four pints of bread and butter canned pickles, which are not my favorite but beloved by Paloma and my mom. I also started a big jar of lacto-fermented dills - but without any dill! I have yet to find any dill weed. I just used plenty of garlic, red pepper flakes, and a whole bunch of grape leaves to stop the pickles from getting soft. My children were aghast when I spotted an enormous grapevine growing up into the trees on the side of the road and pulled over to pick some leaves.

"Mom! You don't know who those belong to!"

"Nobody cares if I pick a handful of leaves off this vine, honey, it's gigantic. Besides, nobody can see me behind the trees."

"Oh, relax, if anybody comes out I'll ask them nicely. It's not like I'm taking the grapes."

I also take apples and plums off of abandoned roadside trees. And the sour cherries off those branches of my neighbor's trees that hang over the fence onto my property. I'm unrepentant. Everybody knows that the fruit hanging in your airspace is fair game. As is the fruit off any tree growing in the ditch beside the road if there's no house in hailing/waving distance.

In Seattle, I had a beautiful young Bing cherry tree that I planted in the front yard, which was unfenced. I didn't mind if passersby took a small handful of cherries as they walked by - the temptation was strong - but I did draw the line when I saw people bringing bags and picking into the bag without asking. Once I actually caught a couple of young men UP IN THE BRANCHES, picking all the cherries they could and stuffing their shirtfronts. I yelled at those guys.

In apple season, I often cruise around looking for trees. I like to make apple cider and it takes a LOT of apples. As I said above, if the tree is not within sight of a house, I consider it free fruit. If it is in someone's yard or planted on the road near the driveway, I will knock and ask before taking any fruit. Oh - and obviously I only do that if I see that the apples are falling on the ground and not being picked up. If there are no apples on the ground I figure the owner is using the fruit. And if the owner says "yes, by all means, take all the fruit you like" I always offer back some cider or applesauce in return. I have some elderly neighbors who offered me all the apples I want in exchange for cleaning up the windfalls.

I truly believe I am acting well within the social norms of my region, but I'm very curious to hear what people from other parts of the country say. Am I a thief? Do you have to hike up a quarter mile driveway and knock before you take a handful of grape leaves? When is a tree abandoned? Is it open season on vacant lot trees? Can you strip them bare or is it good form to leave some fruit for the next person? Tell me in the comments.


Posted by Aimee at 2:13 PM 3 comments Links to this post