On Trading and Canning 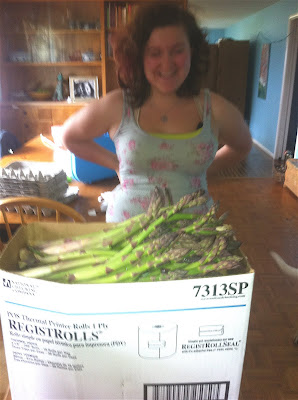 Yesterday I made the first major trade of the year - four dozen eggs and a pound of goat cheese for ten pounds of asparagus. That makes a pretty big box of asparagus, even after deducting my sister's mother's day present (she adores asparagus). I traded with Veggie/Oil Man, now officially my longest-term trade partner. We have three solid years of trading everything we have to trade - eggs, cheese, and mechanic services on our side for organic vegetables, use of equipment, and waste veggie oil on his side. Veggie/Oil Man supplies a great percentage of our fresh food in the summertime, and allows us to glean his fields as the season ends. He is also a very interesting and colorful character and something of a local legend.

The trade network is real fun, something I very much enjoy. I like meeting new people; I like finding out what our local foodshed has to offer; and I like offering up the fruits of our own labor. But it does have a few disadvantages. Imagine for a minute that the only place you could ever shop was Costco. Imagine that most of your fresh produce comes in ten pound lots. Most of us are probably familiar with a ten pound sack of potatoes, and if we have a medium-to-large family, that's not really a lot of potatoes. But ten pounds of asparagus is a lot. Ten pounds of tomatoes is a lot. Ten pounds of snap peas or green beans is a MAJOR lot. And ten pounds of kale or chard is an insane amount.

There are a few ways to deal with massive amounts of one kind of food at a time - recipes heavy on one or two ingredients ( for example - http://newtofarmlife.blogspot.com/2010/06/seasonal-abundance-greens-n-cheese.html), or throwing a party with enough people to absorb whatever you have too much of (any excuse for a party.). But eventually, we have to fall back on preserving. Not that it's a hardship or a last resort - quite the opposite. It's the only way to eat locally throughout the year; a good way to save money; a wonderful source of satisfaction and pride, not to mention cheap christmas presents.

Again, there are many methods of preserving, and each of them has advantages and disadvantages, depending on the produce involved, your preferences, and energy/infrastructure situation. We tend to favor freezing and canning around here. To get back to the subject of this week's trade, asparagus, I am planning to pickle it. I know my siblings both consider pickles to be the scourge of the earth and a shameful waste of good fresh food. I couldn't disagree more. Maybe I was born with a salty/sour gene that they missed out on, but there's nothing I like more than a good half-sour kosher dill. Or some tangy, sweet pickled beets. Or hot n' spicy dilly beans. Or, more to the point, pickled asparagus.

Maybe it has something to do with my love of a good Bloody Mary, I don't know. Is there a better addition to a Bloody Mary than a hot, garlicky spear of pickled asparagus? I think not; unless it might be the pickled yard-long bean served in the Wasabi Mary at the Dragonfish Cafe in Seattle. Last year, alas, only a very few of my pickled asparagus spears ever made it into a Bloody Mary. Most of them were snarfed up by my children, who have apparently all inherited the salty/sour gene. I can't remember for sure, but I think I made six quarts of pickled asparagus last year. There is enough asparagus in the fridge right now for about the same amount - but I'm going back next week for more. There is no such thing as too much pickled asparagus.


Sterilize 6 wide mouth quart jars in boiling water; keep water simmering. Set our sterilized jars on a clean towel on counter. Add lids and rings to simmering water.
Make brine - boil all remaining ingredients and keep at a bare simmer.
Pack jars with cleaned, trimmed spears of asparagus.
Add simmering brine to within 1/4 inch of jar lips. Make sure each jar has a couple of cloves of garlic.
Using tongs, remove lids and rings from simmering water and close jars. Replace jars in simmering water and process for 30 minutes. Remove jars with tongs and set out to cool. Testy to make sure all jars have sealed. If any have not, keep in fridge and use within 2 weeks.

In a pitcher, combine 6 - 8 ounces of vodka, one jar of V-8 or Very Veggie juice, juice of 2 lemons, and several shakes of tabasco. Pour over ice-filled tumblers. Garnish with celery sticks, parsley springs, pickled asparagus, and whatever else helps you maintain the illusion that you are consuming a healthy dose of vitamins along with your alcohol. Best served around the breakfast table about 11 a.m. with 3 of your best friends over a platter of greasy hashbrowns, scrambled eggs, bacon, and biscuits. Hair of the dog and all that.

Seriously! Why on earth would you PICKLE perfectly good asparagus? I understand you have to preserve it. Here's what you do: get a Jack LaLane juicer, and juice it along with some apples and carrots and blackberries. DELICIOUS.

Seriously. Pickling is how normal people turn food into garbage.

That's great Aimee, good for you!

I also got some income from my hobby - selling durians. If you want to know what they are please visit my bog.

All the best with the cooking.

Grandpa
Life on The Farm