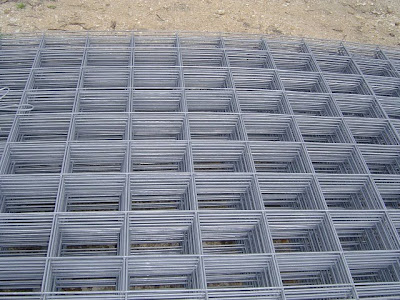 One of the larger jobs on my to-do list is to finish fencing the smaller pasture with cattle panels so we can use it as a sacrifice area and get the hoofed animals off the big pasture in the wintertime. Re-fence actually - it is already fenced in field fencing, but the goats just laugh at field fencing (For a re-cap of our fencing woes, see The Forever Fence (Is It a Myth?)... Goats Are Pure Evil...Maybe Goats Should be Allowed to Run Free?... November Blues) I have been slowly acquiring sixteen foot cattle panels, but they are quite pricey ($45 a pop) and at 100 x 120 feet, I need 28 of them to fence the perimeter. That's $1,260, not including tax, delivery fees, or supplemental hardware.

And that's just the smaller pasture - eventually I need better fencing all around. Hundreds of cattle panels.
So, when I found a lady on Craigslist selling some forty cattle panels for $25 each, I jumped all over it. She's sold her house - is already out, in fact - and selling everything she can. The panels were still attached to the fence posts, we'd have to come knock them off with a hammer and load them ourselves, but we could take as many or as few as we wanted. I offered to take all forty of them if she'd drop the price to $20, but she told me she knew that $25 was rock bottom already and she'd had plenty of interest at that price. "I know," I said, "it's a great price. Just thought I'd give it a shot."
The first order of business was finding a way to transport the panels. We don't have a trailer of any kind (have to rectify that one of these days- we constantly need one). Luckily, I thought of Veggie/Oil Man. He's our neighbor with whom we trade goods and services - mostly eggs and cheese for vegetables (he has a sixty acre organic farm), or mechanic work for vegetable oil and the use of equipment. Recently, Homero fixed his car for him and wouldn't take any money, so it was our turn to ask for something. He was very accommodating, and offered us his hay wagon any time. We ran right out to pick it up and then drove to the cattle-panel lady's place to start taking down panels.
It wasn't super easy work - each panel was attached to three posts, by some four U-nails on each post. Each nail had to be removed with the claw end of a hammer, and many of them were stubborn. After being detached, each sixteen-foot panel had to be dragged through a muddy field and hoisted up onto the wagon. The lady was helping us, but even so, it was slow going.
Homero and I were working on panel number twelve or so, when suddenly a middle aged woman came hustling across the neighboring field, flanked by two large Rottweiler-y dogs. "Just what the hell are you doing?" she screamed at me.
"Umm, I'm buying these cattle panels," I said.
"You can't do that!" She yelled. Her dogs were barking, and it occurred to me that I was busily removing the only obstacle between me and them.
"I'm sorry," I said, "are these your cattle panels?" I knew they weren't - they had been nailed to my side of the fence posts, and there was old mashed down field fencing nailed to her side.
She sputtered. "It's my FENCE! Her damn horses ruined my fence..."
"But do the cattle panels belong to you? Did you buy them?" I pressed. If she had claimed ownership, obviously we would have called it quits. But she didn't.
"I'm calling the cops!" she stormed off, and thankfully her dogs followed her. At this point, the Craigslist lady came up, asking "What did she say to you?" I gave her the blow by blow, and she said "I hate that woman, she's half the reason I'm leaving. Seven years, and we've fought with them just about every day. Don't worry, the panels are mine."
So we kept taking down panels and loading them up... but meanwhile, the Craigslist lady was getting more and more nervous. "Oh God, there's her husband. He's an even bigger #$%hole."
Then: "Do you think you have enough? I know you wanted more, but you can always come back tomorrow."
Then: "Here, don't bother, you can tie them down when you get to the gas station. I'm just afraid they might block the driveway..."
Now, we are getting nervous ourselves. "Look here," I ask, "is there going to be gunplay?"
"Oh no, no no... but let's just get out of here."
So we carefully and slowly drive the quarter of a mile to the gas station, and as we are tying down the cattle panels, a sheriff's car pulls in to the parking lot. "Here we go," I think, but the deputy just trolls slowly by, makes a circuit around the gas station, and leaves again. Either they never called the cops at all and this was just part of the deputy's regular route, or they did call and the department decided it wasn't worth bothering about.
I'm pretty sure we didn't do anything illegal - I believe the woman that the panels were hers. Her entire property was fenced in them, not just the side bordering the mean neighbors. The neighbor herself never said they belonged to her. If what Craigslist Lady says is true, those neighbors made a habit of calling the cops every other week over something or other. Who knows - I never met either of them before tonight, so I don't know Jack.
I hope, however, that nothing further comes of this, because now I have enough cattle panels to create my sacrifice area for half of what I thought it would cost - and just in time, too.

I was holding my breath most way through your story. I'm glad it ended peacefully. I hope you got all 40 panels, or will you need to return for more?

That sounds like the kind of story that could be retold with absurd, hastily-drawn illustrations and it would have us all laughing until we retched.

Wow -- aren't you glad that your neighbor problems haven't reached that point yet? (Hopefully never!)

I'm kinda a bitch, so I'd probably have stayed and kept working up until the cops showed up. Because the cops aren't idiots -- and if they were called out weekly, they're not going to pay much attention to crazy lady.

I'm with Dea-chan! Call their bluff and they usually back off...

In the future, get your hands on a fence tool (fencing pliers). They have a pointy end that is used for pulling fence staples, and is absolutely the appropriate tool for the job!!

lol....you should publish it as a short story someday!! That was a good one. Are you going back for more panels: ) ?

Nice looking panels...I could use some. How did the green house turn out?

That is a hilarious re-telling, after the fact of course, knowing that it all turned out okay. You never know what you're going to run into trying to save a few bucks on the farm. We've had similar experiences with fencing and goats and the cattle panels have worked well ... except when a doeling jumped through and made it all the way to the creek (and jumped in) before we caught her. Ahhh, farm life!

I would like to incorporate a cattle panels arch into my vegetable garden. I am just afraid it would create too much shade for the surrounding plants. There are lots of things you can do with cattle panel if you are creative

We are planning a coop build out of our own - cattle panels our 7 chicks are getting big now (just got them a month ago.) Looking at your coop has me thinking about their needs in a completely different direction now! What a beautiful home for your feathered friends!

I favor using the woven wire also. For the reasons Bill gives, and also because it has more "give." I have used a woven

wire round pen for many years, and still do. Five or six years ago we built a second round pen panels with cattle panels in

a different field. It looked very spiffy. The first time we used it was at a clinic, where an out-of-control novice dog ran

one of the sheep into a panel. Its neck broke and it had to be put down (fortunately, one of the clinic attendees was a

vet). If that sheep had been run into wire fencing I'm sure the damage would have been minimal

I enjoyed this post very much. You tell stories on your blog like I tell them on mine. It's a pleasure to read another's tales of new farm adventure. Keep writing!
K