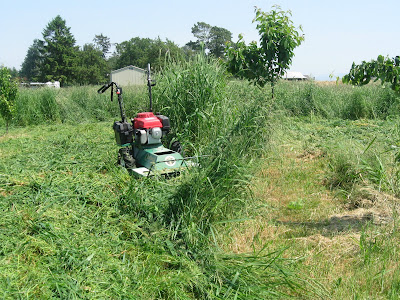 The lawnmower is still not fixed, despite seven separate trips to the mower place for parts (they are laughing at us, I know they are) and much cursing. Today, Homero decided to rent a brush hog to mow the front lawn. And the thistles which were forming an impenetrable thicket in the back pasture. And the giant patch of poison hemlock, which has been weed-eaten twice so far this year but which was starting to flower nonetheless. You don't have to like the nasty stuff, but you kind of have to admire it. Homero said he's enjoying working out in the sun (it's 87 degrees out). He says it reminds him of life in Mexico. 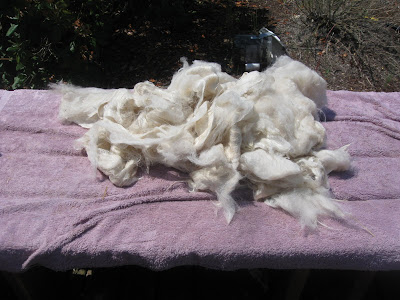 Meanwhile, I have been washing and dyeing alpaca fiber. This saturday - day after tomorrow - is kid's day at the farmer's market and Rowan's big chance to make back our shearing fees and thus keep the alpacas. However, it's also finals week and she hasn't had time to process the fiber. So I'm helping her. What you see above is about one-fiftieth of what we've got. Less. I can't understand how anybody can make a living with this stuff: it takes whole shitloads of time to process little bitty amounts. It's annoying. But I don't have patience for this sort of work. 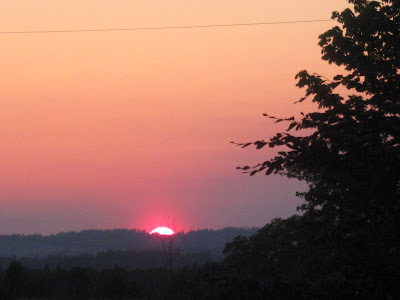 This was yesterday's sunset. I'm looking forward to tonight's, with a cold beer in my hand.

Thanks for the kind comment on my blog. Youa re absolutely right about the potty training window, I know I need to get on that, and I appreciate the reminder that the window may not last.

Good luck with the lawnmower, we have gone through a few ourselves. I think it's something about this county... :)