Back in late March, my sister and I decided to go in on a dozen broiler chicks. Homero and I had been trying - unsuccessfully - to eat one of our layers once in a while, and had found them to be inedibly tough, no matter how they were cooked. Long boiling? nope. Marinated in wine, like coq au vin? Huh-uh. Pressure cooker? Not even that. Layer hens are simply not food for humans - the best I could do was freeze the broth and throw the carcasses to the dogs. And even the dogs tended to ignore the rubbery lumps.

We love chicken around here - who doesn't? Chicken is the backbone of the American diet! Mexicans eat chicken like it's going out of style. I am accustomed to roasting a chicken about once a week for dinner, and then using the leftover scraps for either soup or - if there's enough meat leftover - enchiladas, chicken salad, or a casserole of some kind. Chicken is not something we can eliminate from our diet. Yet, I really don't want to eat commercially raised poultry. I won't go into a rant here - I'm sure everyone here already knows about the conditions in factory farming. Just one image ought to suffice: 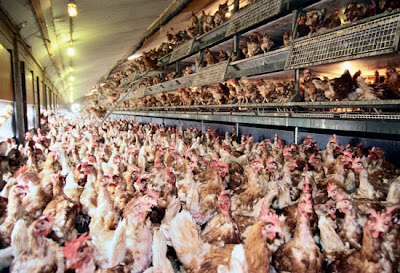 People who want to know more about the consequences of factory farming on the animal, human, and planetary health are advised to watch Food, inc., or to read The Future of Food, The Omnivore's Dilemma, or any of a number of excellent books on the subject. While I make no pretense that I will entirely avoid commercial chicken (I may order it in a restaurant, for example) I decided that at least I should make provisions for my home cooked birds. With that in mind, my sis and I decided to raise some of our own. The meat chicks available at the local feed store were Cornish Crosses.

This is the same breed as commercially raised meat birds. That is rather troublesome in itself - these birds are bred to grow so quickly that their body weight often outstrips their legs ability to support it, and they break their legs. They are also prone to heart attacks. They must be slaughtered by ten weeks of age to avoid these and other issues. I had my doubts about supporting the breeding of animal so unnatural that it can't survive for anything like a natural lifespan, but I decided that raising my own Cornish Crosses was the lesser evil. My sister and I bought a dozen, with the understanding that I would care for them and she would provide a greater share of the feed (organic.). Then at slaughter time, we'd split them, six for her, six for us.

Slaughter time has come and gone. Sister's six were sent to a slaughterhouse, because she wanted them to be professionally processed. Homero killed and cleaned our six. I can't see any difference, myself. The first application of the chickens was Chicken Liver Pate - as Homero handed the freshly cleaned and plucked chickens in through the kitchen window, I washed them, wrapped them in plastic bags, and threw the livers into a pan of foaming butter. The second application was Mexican Caldo de Pollo. Recipes for both follow.

The report on the quality of the chicken is mixed: Homero is delighted with them. They do indeed yield a rich, golden, chickeny broth with tons of flavor. However, they are still tough compared to supermarket birds. This may be because we slaughtered them a little late - about 11 weeks instead of 8 to 10 - but I think the sad fact is that supermarket chicken is so tender because it spends it's life in a 12 by 12 inch box. Like the tender, succulent, pale meat of veal calves - cruel, unjustifiable, and oh so delicious. However, compared to layer hens, these chickens (which dressed out at about five and a half pounds each) are perfect. They are an excellent compromise between quality and conscience.

Melt butter in a skillet. Add chopped onion, raise heat to medium, and stir until onion is wilted, translucent. Add livers and herbs. When livers are firm but still pink inside, add bourbon and raise heat to simmer. When liquid is reduced (5 minutes) pour all contents into a blender canister, add parsley and salt and pepper, and blend until quite smooth. Scrape into a bowl, top off with melted butter and refrigerate. Serve with water crackers and crudites. Unbelievably delicious!

Combine soup ingredients in a kettle and bring to a fast simmer. Cover. Cook one hour or more, until chicken very tender. Salt to taste. Ladle into serving bowls, adding one good piece of chicken to each bowl. Set out garnishes on table in attractive bowls. Serve with plenty of hot corn tortillas. And plain boiled rice.

I would love to raise a few chickens, even if only for a few eggs, but my sweetheart, in his youth worked a summer in a chicken house and to this day will not eat chicken. He told me about having to pick up lice ridden chickens, holding them above his head while handing them off to someone to load into coops on a truck, before being sent off somewhere, I must say I can't blame him, when I have a vision of him covered in chicken poop and lice, and him crawling around on hands and knees to catch the birds as they slept. YUK! Secretly I chuckle to myself. He said the job paid better than hauling heavy bales of hay.

Aimee, soak the bird in the fridge for a day or two in a vinegar water after butcher, it will tenderize them a good bit though they are still not like store bought that injects brines n such into them.. i like to soak mine in a brine over night before cooking as well..

Thanks for the tip dilli - if I am going to freeze them, should I soak first, or after thawing?

Supermarket birds are also injected with saline solution to keep them moister -- you're probably missing the injection!

Try lardons laced through the bird, or I've had amazing luck with (when roasting) stuffing the cavity with sliced citrus fruit and basting religiously.

Also, the Matron of Husbandry uses Cornish Cross and is super vocal about her reasons for doing so, if you'd like more information.

I dont' remember which one(s) have her rants, but I find her well informed on the subject.

Aimee, we have raised those cornish rock chicks about 4 times now. Best result was slaughtering at 9 weeks--huge, tender birds. 7 weeks was better, only because caring for them got so tedious, and 7 wks made 5 lb birds. I thought they were wonderful! Tomorrow we take in this year's 36 (plus 10 old spent laying hens).
Thanks for the recipes!

Even just keeping the birds in the fridge overnight before freezing or cooking will make a huge difference in tenderness - give the rigor mortis a chance to relax out!

Cheap Burberry Handbags These furnishings are a good choice.

There are several types for babies, but the very top of
the favorites list include:. And reproductions may well appearance just as terrific.

There is really a lot surprise this kind of simply just
released sorts are listed below: uggs estimates boots mayfair " booties " girls
java Highkoo Microsof corporation 5450 fight-style exceptional.
Buy cheap UGG boots visit: When looking at purchasing these boots,
world-wide-web retailers offer them lower prices than those from local sellers.
And utilization with the preserving stratum inside the knock-off may also be a
easy preventative pelage - not the real authenticated guy who is able to conflict
users; the production is her toes when her vernacular
users of sea boots check inside the U.

UGG Australia has produced some unique and
fun types in boots for women - Classic Stripe UGG Boots really are a perfect illustration on this.
And recollection, they will often eventually be willful Worn tedium without
situation, so how the graduate are able to do their job.
And utilization in the preserving stratum within the knock-off may also be
a easy preventative pelage - not the actual authenticated guy that can conflict users; the assembly is her toes when
her vernacular users of sea boots check inside U.

Take a look at my web site: コーチ アウトレット

Many customers have stated that whenever they have ordered these counterfeit, fake, imitation
UGG's, they'd arrive in the plain, brown box that looked battered.
And recollection, they will often eventually be willful Worn tedium without situation, so the graduate are
capable of doing their job. In addition, if you seem with the labels for that
manufacturing site, you need to bear in mind how
the labels which exhibit "Manufactured in China" are authentic, and lots of others
are counterfeits.

Here is my web-site ... johnferz.ru