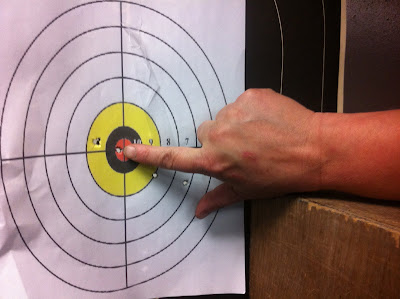 My first bullseye (probably a fluke) 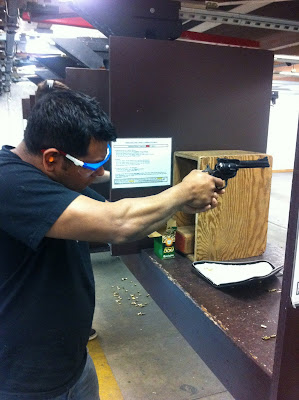 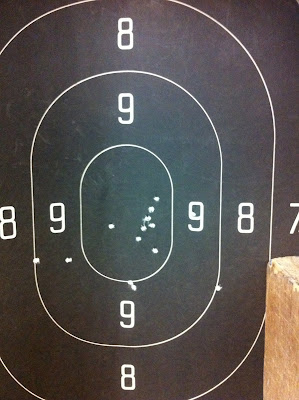 
About two years ago, I bought a handgun( http://newtofarmlife.blogspot.com/2009/10/armed-aimee.html). I was almost totally inexperienced with guns: my siblings and I were given daisy air rifles one christmas when I was about eight, and we merrily donned puffy jackets and shot each other until our outraged mother caught us and took our guns away. Only once had I ever shot a real gun. When I was fourteen, my Dad won a tiny little pearl handled .22 in a poker game. It was almost small enough for me to palm, small as my hands were at the time. He took me down into the sub-basement of our apartment building and showed me how to fire the gun into the damp, crumbly brick walls. That was that as far as my firearms experience.

I decided I needed a gun when it became clear we would be doing our own slaughtering and butchering. Homero's friends dispatch the goats by the old-time method of a sharp knife to the throat, but I prefer a bullet to the brain. The first time I saw one of our pigs killed, by the very professional Keizer Meats men, they used a .22 revolver at point blank range, and that pig was dead before it hit the ground. If I'm going to kill an animal myself, I want it to die just that fast. So I asked the husband of a friend, who is a very knowledgeable enthusiast, to help me pick a gun that would serve my needs. This is the gun I picked:

It's a Ruger single action .22 revolver. 19th century technology that still works with perfect efficacy. It may not be the most excellent choice if you are looking for personal protection, but for dispatching pigs and goats, or for target shooting, no problem whatsoever. Plus - and forgive me, anti-gun folks - it's a COOL gun. It's a cowboy gun. It LOOKS like a gun, unlike modern automatics, which to me look like they came out of a vending machine. If - God forbid - I ever did have to use it to protect myself, whoever was threatening me would feel for certain like he was looking down the barrel of a real gun.

It was recommended, it was reasonably priced, it was nearby. So I bought it. Then it spent the next year and a half in a box on a high shelf. I never touched it. I must have been scared, I guess. To myself, I just kept saying "I need to sign up for a safety course." My friend who recommended it to me asked me, every other month or so, "so have you taken that pistol to range yet?" No, not yet. My younger brother likes to shoot, and he offered to take me to the range several times. "Oh, sounds like fun," I always said. "Yeah, I should really do that."

Meanwhile, the gun stayed in it's box.

Yesterday, my brother came up to spend the night. He brought his pistol and just flat out told me we were going to the range. He provided the ammunition (I never bought any) and we paid the entry fee (a very reasonable eight bucks, paper targets and earplugs included). My brother taught us the four cardinal rules of shooting:

-treat every gun as though it is loaded
-don't point the muzzle at anything you don't want to shoot
-keep your finger away from the trigger until you are sighted and ready to fire
- and I think I forgot the last one but it'll come to me.

He helped us learn a basic stance and a basic grip, and taught us the basic etiquette of the public range. Then we spent a happy hour and a half shooting. It was really very fun, although much more difficult that I would have guessed. Even a .22, for example, gets quite heavy after a while, and my injured shoulder did not stand up well after the first half hour. I learned that there is a big difference between my accuracy at 21 feet (the minimum) and at forty feet. I learned that with a little time and practice I can get over that panicky OH MY GOD THERE'S A GUN IN MY HAND feeling. And I learned that Homero is a much better shot than I am.

I enjoyed target shooting. I will do it again, and again, until I feel comfortable and reasonably practiced. But somewhere in my future I know there looms a much more difficult test: the day I actually shoot an animal. I'm not looking forward to that day at all, but at least I will have the satisfaction of knowing that I have done what was needed to ensure that my animals suffer as little as possible in their final moments.

YOU NEED TO TAKE ME SHOOTING. And I bet I'll be a great shot. I hope. I'm really really good at throwing darts and at shooting a bow and arrow.

And at those rigged carnival shooting games.

Maybe you should change your name,,,only slightly,,,to Annie (lol) as in Oakley. :))