Everybody Hates Pigs, and Confessions of Laziness 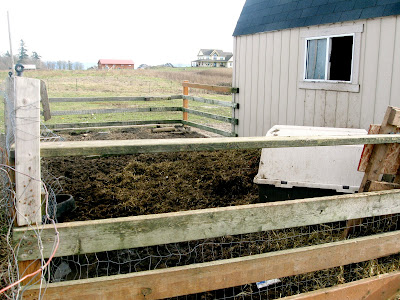 Our pigpen is pretty squalid this time of year. When we don't have a pig in the pen, it serves as a place to pitch the old straw and horse manure until I feel strong enough to get the wheelbarrow and haul it all out to the official compost pile. We were without a pig for several months, so the pile got pretty high. I did move some of it before we put the pig in there, but I have to admit, thew pile was still pretty high when the pig moved in. I rationalized my laziness in two ways: 1) my knee freakin' hurts, and 2) the pig will actually enjoy rooting around in there and turning the pile for me, thus facilitating the pile's transformation into compost.
There's no doubt that both those things are true. The pig does like digging in the pile. He has turned over most of it, in fact, and dug deep holes. But even if the pig is happy (which is not something I can tell for sure, not being a pig expert) I was feeling guilty. Especially after a week of rain. Most of his pen was mud-soup, belly high on a little pig. He does of course have his doghouse full of dry straw, but anytime he leaves the house he is plunged into a freezing cold stew of compost. And, he's probably lonely. Pigs are social animals, and the only interaction he gets in there is the chickens trying to steal his food.
Not that letting him out did much good on that score. Yes, we let the pig out. We just felt too guilty. If we had two pigs, I wouldn't feel bad about letting them live in there together for their entire lives, but a lone pig? Nope. As soon as he got out, he started running around in circles and digging. AND bothering the other animals. Pigs are seriously obnoxious. Seriously. He ran under the ponies and tried to nip their bellies. He slammed into the goat's legs, nearly knocking them over. He spilled all the water in the bucket. He chased the chickens.
The goats mostly ignore him regally 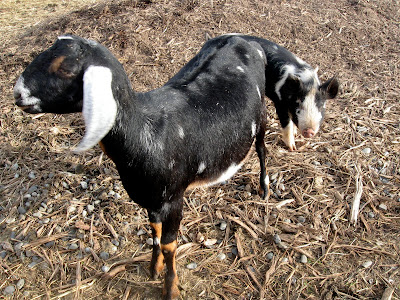 but the ponies actively try to bite to kick him 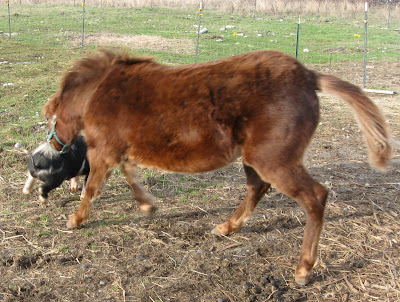 Ivory tried to play with him, and when he nipped her on the ear, she tried to bite him back. 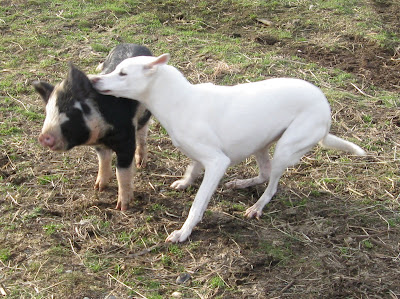 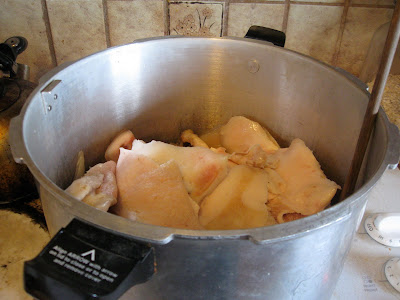 Except for a single roast, this is all that is left of the last pig: a big bag of fat scraps. I decided to try and render them into lard. I hope I'm doing it right: all I did is dump the frozen scraps into a large pot and put it on medium low heat. I figure sooner or later it will mostly melt, and I can skim off anything that isn't lard. 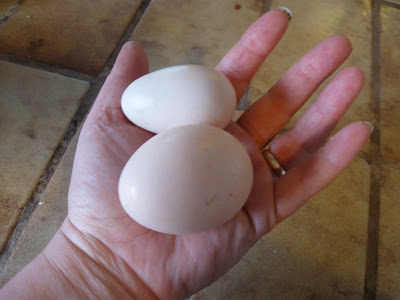 Also today I found three eggs, and one of them is clearly the first contribution of a new pullet. See how it is small and skinny, almost cylindrical? This is good news! For the first time since late November, I have a full dozen eggs in the fridge!

Love your 'feisty' dog !! She is so gorgeous, a REAL dog.

Pork and eggs, two of my favorites! If you want a great recipe for pork shoulder, look up pernil. It's a Puerto Rican recipe, simple and delicious and what we had for dinner tonight.

Olive, thanks! That is Ivory. We got her from the dog pound as a 12 week old puppy eight years ago. She's far and away the best dog we've ever had. She helps me with the goats, she's smart, and friendly, and fierce enough when strangers come. We think she's part whippet, but we don't know what the other part might be.

Lard...tamales...and I see that's a pressure cooker ya got there. I steamed our tamales in the pressure cooker a couple days ago, and I think they turned out better than the long steam in a regular covered pot. Moister. Have you ever tried doing tamales that way (I'm totally assuming you make tamales...but I'm not wrong, am I?).
20 minutes at 15 pounds.

no, I never have made tamales in the pressure cooker, but I think it's a great idea! "Tamales" was the first word out of my husband's mouth when he saw me rendering lard, so I think we'll try it!

I'm having a crappy week and your post totally cheered me up! :-)
My grandma (who lived on a hog farm in rural IA and raised Chester White Hogs her entire life) used to cook with lard - I still have some of her recipes that call for it and always find them amusing.